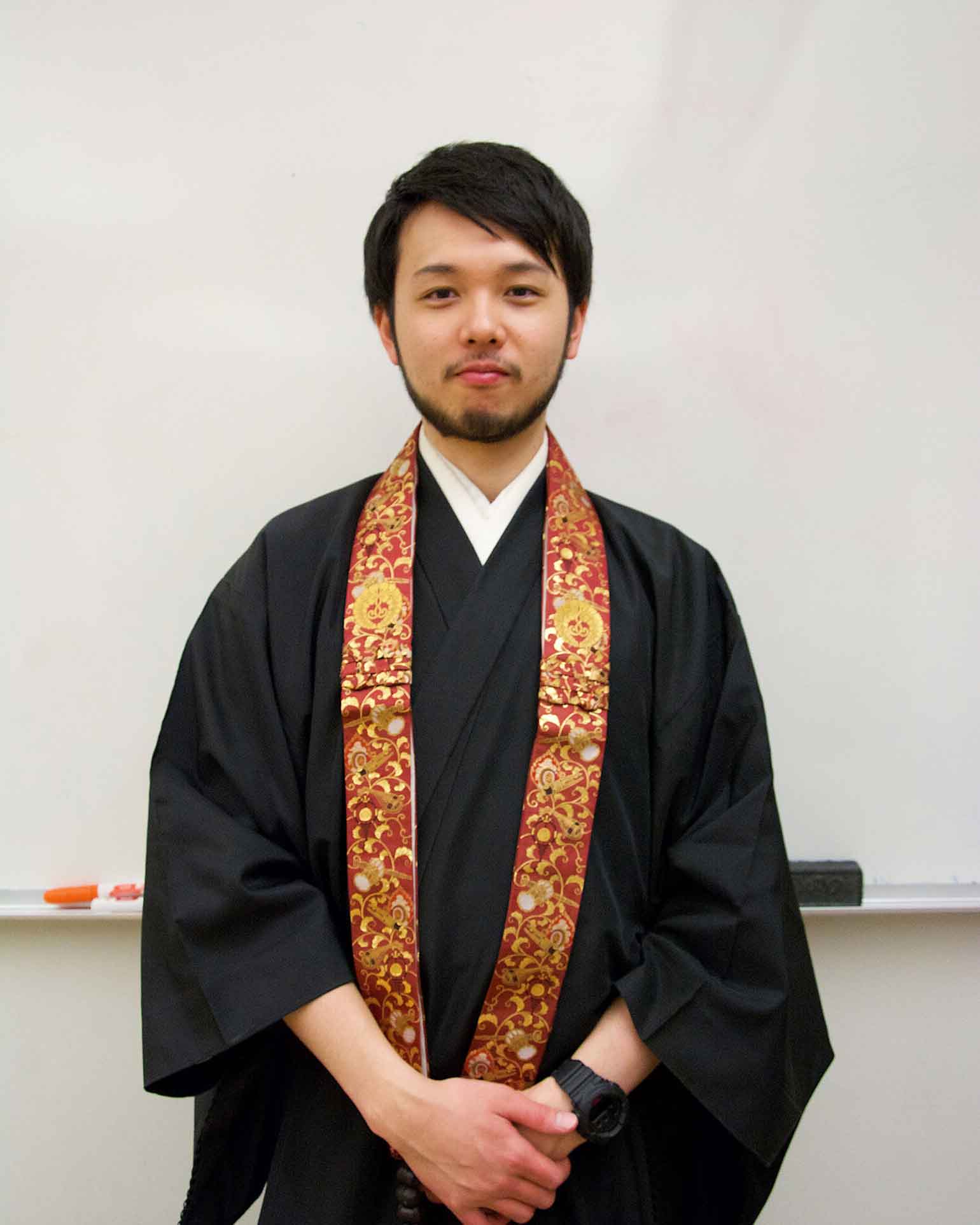 I attended, with Sid Ikeda, a service at a Jodo Shinshu temple, Toronto Buddhist Church. I have never been to a Buddhist ceremony in Canada before but have been to many in Japan. Sid was kind enough to introduce me to the young Minister, Reverend Yoshimichi Ouchi. He is originally from Oita prefecture, born to a family that has been running their temple for twenty-five generations.

He graduated with a major in religion with a focus on Buddhism from Ryukoku University in Kyoto and Shiga, and further studied the Teachings of the Buddha and Shinran Shonin at Chuo Bukkyo Gakuin, the seminary for Jodo Shinshu studies. He is a minister who is passionate about spreading the teachings of Buddhism in Canada. His Dharma Talk at the morning service was relatable. The Buddhist terms he used were broken down to terms that were easy to comprehend, even to listeners who were not familiar with Shin Buddhism. 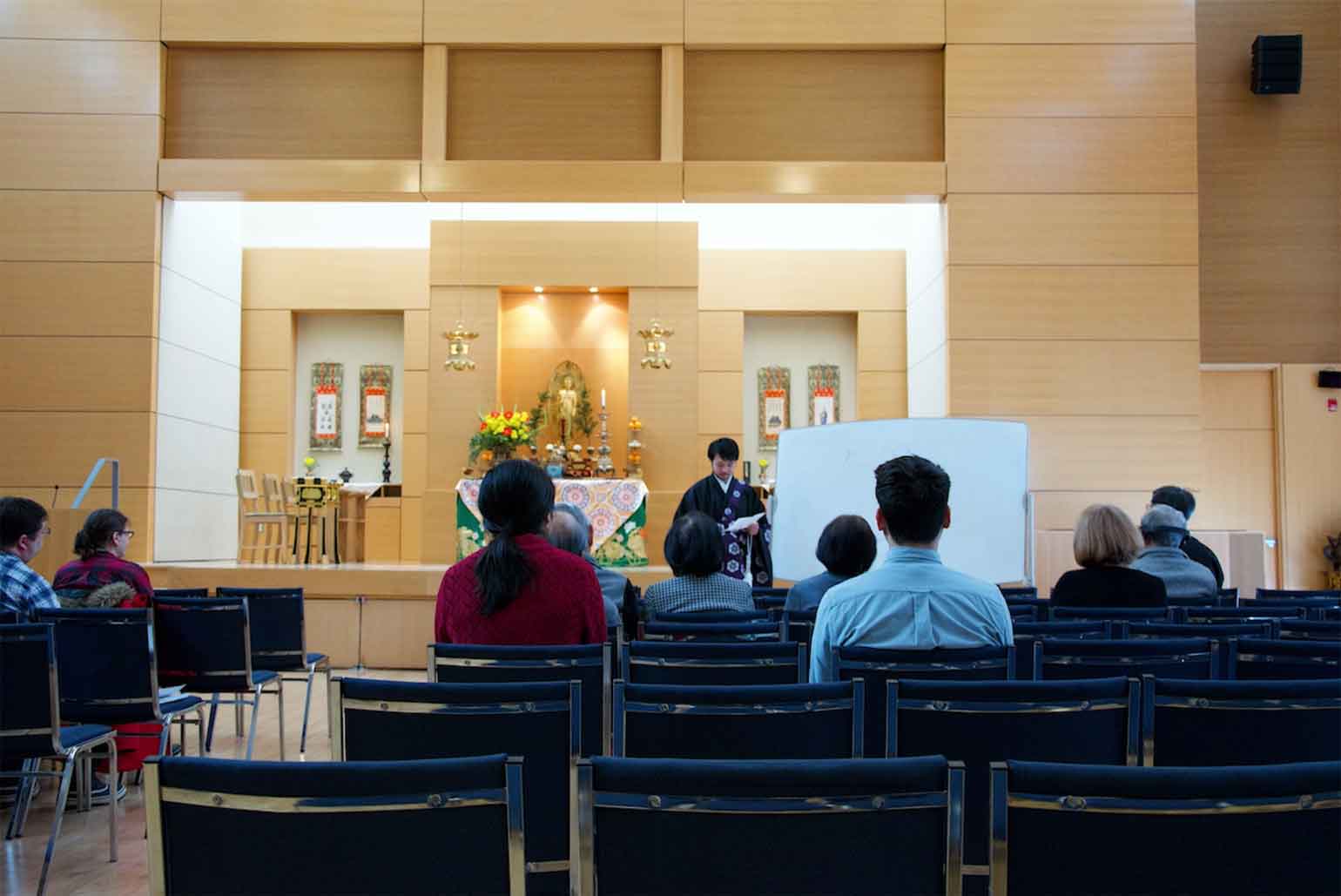 After a Japanese-style lunch that was served for all participants of the service, I sat in a room with the resident minister. I spoke to him about how he became a minister in Canada and where he aims to head from here. 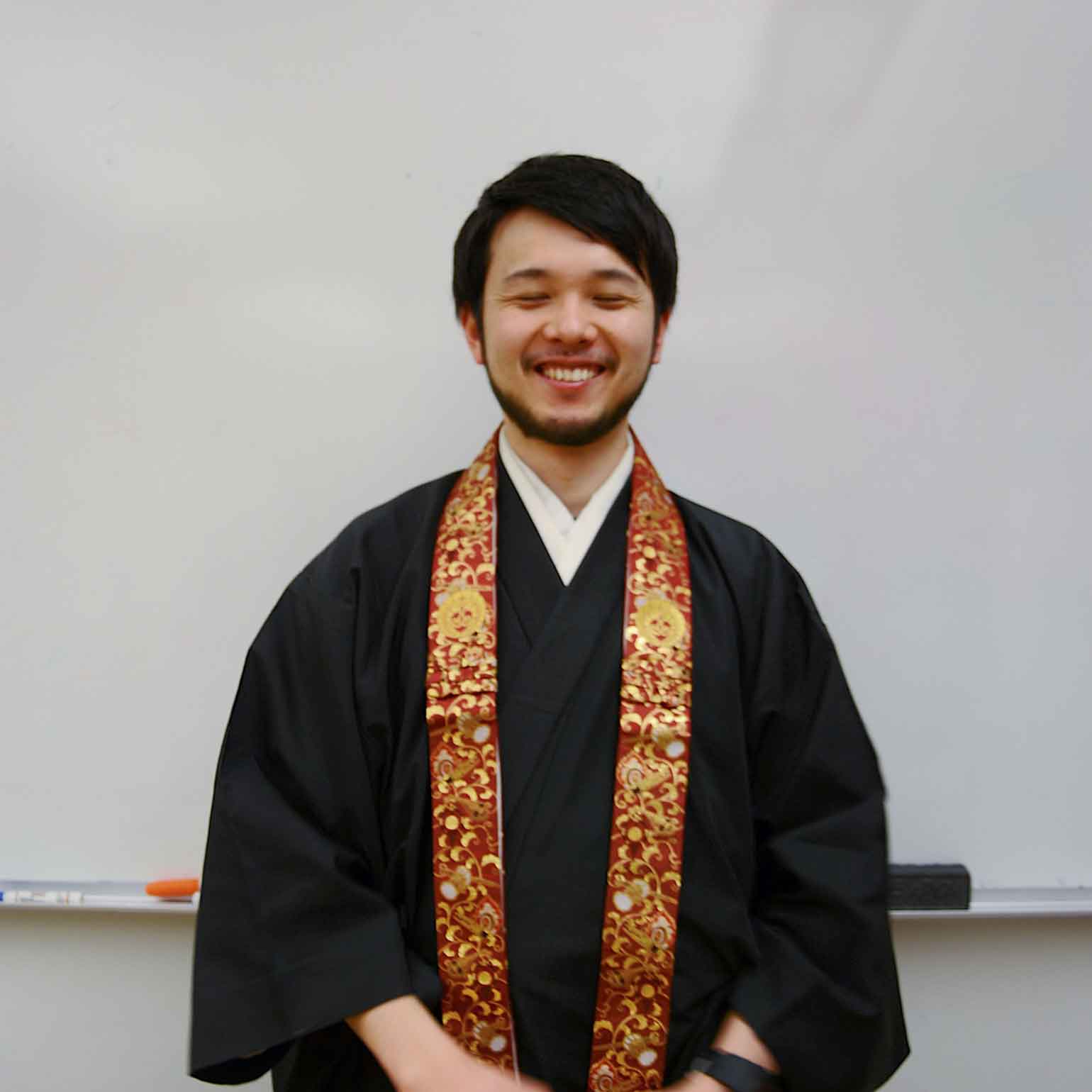 Tell me about how you ended up in Canada.

I grew up in a family temple and both my father and grandfather are Ministers. In such an environment, it was normal for me to grow up accepting the religion unconditionally. My older brother followed the family’s tradition, and I eventually got interested in working as a minister abroad just like my father, who was a minister in the States.

Was there a reason behind choosing Canada?

I was assigned to the Toronto Buddhist Church in 2016, but I did not personally choose Toronto at the time. There were several options such as America, Hawaii, Canada, Brazil, England, Australia and Taiwan. Originally, I wanted to go to the States, but the location didn’t matter too much to me as long as I could be engaged in ministerial work. I ended up here, luckily because of Bishop Aoki, who is currently in Vancouver.

I saw quite a lot of people of Japanese heritage here today. Are majority of participants Japanese?

Majority of participants are Japanese Canadians. Their outward appearance is Japanese, but they are Canadian. I would say, seventy per cent of the members and visitors are of Japanese heritage and they are mostly second, third or fourth generations Japanese Canadians. Off course, there are members and visitors who are from many other cultures too. I would say, around thirty per cent of the whole group or more.

The number of non-Japanese Canadian attendees are increasing today, and it is probably caused by the trendiness of North American perception of the “Zen meditation”. There is a Buddhist boom in Canada, maybe from the influence of people like the founder of Apple, Steve Jobs

You did mention about the assumptions Westerners tend to have about Buddhism in the service. Were there any struggles you had since you came to Canada?

Translating between Japanese and English is difficult. Particularly, it is difficult to translate Buddhist terms that have no direct English translation. Jodo Shinshu Buddhism has been in Canada for over a hundred year. Early in our history we have used ‘borrowed words’ from other faith traditions, mostly Christian, to describe Buddhist concept. A perfect example is the word ‘church’ being used in the name of our temple. The borrowed terms still carry the ideas and nuances of the original uses, and this can be confusing when used in our Jodo Shinshu context. Ministers think a lot about these translations and are trying to find the best way to address this.

What are your aspirations in Canada?

To spread the teachings of the Buddha. For people to feel Buddhism as something close to them, something they can relate to. I want to create opportunities for people to enjoy Buddhism and to encourage people to put their palms together “in Gassho” front of Amida Buddha.

Reverend Yoshimichi Ouchi was born in Oita prefecture, Japan. He grew up in a family Temple, where his Grandfather and Father are Ministers.
Reverend Yoshi’s family goes back 25 generations in the family temple. Buddhism and serving the Temple has been a life-long practice for Reverend Yoshi.
Reverend Yoshi studied religion, with a focus on Buddhism, at Ryukoku University in Kyoto and Shiga.
After graduating from Ryukoku University, Rev. Yoshi went to ChuoBukkyo Gakuin School, part of Nishi Hongwanji-temple, to study the Teaching of the Buddha and Shinran-Shonin who was the founder of our sect in Kyoto.
Between February 27th, 2011 and May 2nd, 2016 Reverend Yoshi completed three levels of ordination: Tokudo, Kyoshi and Tokubetu Homuin Shikaku.
During this time he also volunteered at a temple in Osaka and took on the duties of a Minister for two years.
After receiving his ordinations, Reverend Yoshi spent a year at Gonshiki Shidousho where he trained to chant and studied important Buddhist rituals.
On April 15th, 2016 Reverend Yoshi was assigned to the Toronto Buddhist Church.

For more information about the temple, visit http://tbc.on.ca/about-us/our-ministers/