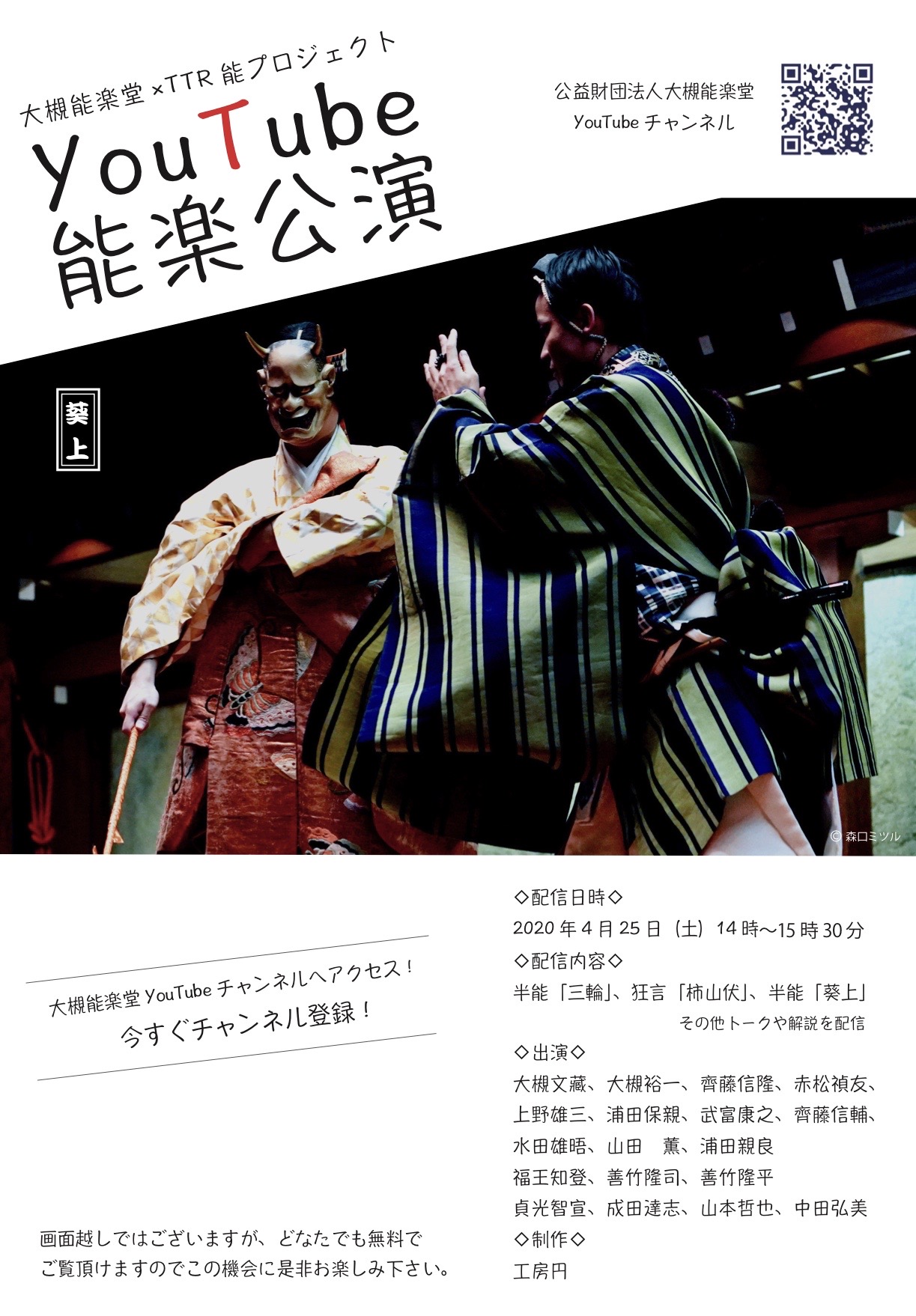 Due to the precaution of COVID-19 all performances at the Ohtsuki Noh Theatre have been cancelled up to summer 2020. The performers, however, recorded from the stage in front of a camera without audience for online streaming.

No English subtitles
To select the performance part only, skipping the speeches and commentaries in Japanese,
Please refer to the following timings.

The First Half [Not included in this streaming]
Once upon a time, a Buddhist monk named Genpin lived in Miwa Village in Yamato Province (near present-day Sakurai City in Nara Prefecture). A woman visits him every day at his small house. She brings with her branches of Japanese star anise and water as an offering to Buddha. On a lonely autumn day, after Genpin decides to ask the mysterious woman’s name, the woman comes again. She asks Genpin if he can lend her a piece of kimono since it gets cold at night. He willingly accepts her request and gives her a kimono. When the delighted woman is just about to leave, Genpin asks her where she lives. She replies that she lives at the foot of Mount Miwa and advises him to find a gate with Japanese cedars when he visits her. She then disappears.

The Second Half
A villager who has just visited the shrine of Miwa Myōjin (Deity of Miwa) notifies Genpin that he found Genpin’s kimono hanging on a branch of the sacred Japanese cedar tree on the shrine grounds. Hearing the news, Genpin comes to the cedar tree and finds that a Japanese poem is stitched on his kimono. At that moment, he hears a beautiful voice from behind the cedar tree, and the Deity of Miwa, who has transformed into a female, appears. The deity tells Genpin that deities debate how they can save all suffering beings on earth and therefore they too suffer as humans do. She requests him to save her sinful self. She then narrates the story of a god-and-human couple who once lived in the village of Miwa and while telling the mythological story of Ama-no-Iwato, she dances. When Monk Genpin wakes up from his dream at dawn, the deity vanishes.

Highlight
This piece describes a story in the village of Miwa in Nara Prefecture, the home of Japanese mythology. Various troupes of Yamato Sarugaku (Yamato-style humorous mimes), which later developed into the current Noh schools, originated from the area near this village. The village of Miwa, whose villagers worship the whole Mount Miwa as its deity, is quite an attractive place giving off a special mystique. Suitable to the story of Miwa village, this Noh piece is filled with a mysterious and poetic atmosphere, which might bring you the feeling of comfort, nostalgia, and fantasy.

With Monk Genpin, the audience is gradually enchanted, slowly leaves their world, and enters the mysterious world of deities in the woods of Japanese cedars at the foot of Mount Miwa. They will eventually find themselves meeting with the Deity of Miwa, who transformed himself into a noble and elegant female, listening to the ancient myth of the deity, and indulging in the dreamy music that the deity performs. Furthermore, they are introduced to the myth of Ama-no-Iwato.

On his way back to the Dewa Mountains from ascetic training in Katsuragi, a hungry mountain priest stops to eat a persimmon from a tree by the road. He climbs the tree to get the fruit. The farmer who owns the tree sees him and becomes angry, but pretends not to notice the priest. Teasingly, the farmer shouts things like “That must be a bird” or “It’s a monkey, no doubt.” Not wanting to be discovered, the priest responds by making sounds of the animals referred to by the farmer. Finally, the farmer says, “I’m sure it’s a kite. But then again, a kite would spread its wings to fly. If it does not spread its wings, the figure must be that of a man.” The priest falls for it, jumps out of the tree, making the sounds of a kite, and then…
Through the simplicity of Kyogen, anything can be imagined as actually being on stage. This play allows the full expression of the imagination, delighting the audience with a world of possibilities on a simple stage.

Noh Lady Aoi
The First Half [Not included in this streaming]
Aoi-no-ue (Lady Aoi), the formal wife of Hikaru Genji and a daughter of the Sadaijin (the Senior Minister of State) family, has been possessed by a phantom and is seriously ill. Although her family has tried various cures to help her recover, nothing has worked. In order to clarify the identity of the phantom, they have finally decided to invite Priestess Teruhi, who has mastery of the art of azusa, which calls forth phantoms with the sound of a bow made of Japanese cherry birch (azusa-yumi).

The phantom, who is trapped by the priestess’s prayer and appears, is the vengeful spirit of Rokujō-no-miyasudokoro (Lady Rokujō), the wife of a deceased crown prince and a lover of Genji. Rokujō is a very sophisticated noble lady. However, she has recently lost Genji’s attention and is rarely visited. Furthermore, she lost a contest for precedence to Genji’s wife, Lady Aoi, when her carriage was pushed aside at the time of the Kamo Festival, when she secretly went out to see Genji in the festival parade. The spirit of Lady Rokujō thus complains of her growing agony which can go nowhere. Looking at Lady Aoi, she is torn by jealousy and beats Aoi to take her soul out, just as a wife hates and beats her husband’s young lover.

The Second Half
The subjects of the Sadaijin family are awed by the fury of Lady Rokujō and rush to invite a priest, Yokawa-no-kohijiri, who is a powerful practitioner of Shugen-dō. When the priest starts a sacred invocation, the jealousy in Lady Rokujō’s heart embodies itself as a female ogre. Revealed to be an enmity personified, Lady Rokujō assaults not only Lady Aoi but also the praying priest. After a bitter fight, the vengeful phantom of Lady Rokujō is overcome and calms down. Lady Rokujō’s spirit becomes peaceful and capable of becoming a Buddha.

Highlight
Although the title of this drama is Aoi-no-ue (Lady Aoi), the lady herself does not appear on the stage. A kosode robe is placed flat at the center front of the stage to embody Lady Aoi, who is suffering from the phantom without resistance. The core of this drama is the affection and jealousy of Lady Rokujō, who cannot help being an ogre. Since she is an ex-crown princess, the actor needs to express dignity in her eerie spirit even after she is transformed into an ogre. At the ending of maeba (the first half of the play), she throws a fan at the robe and disappears while covering herself with a kimono. Particularly, in this scene, the actor has to express her emotional upsurge while moving gracefully to maintain her dignity.

This drama involves various devices to nurture the atmosphere of The Tale of Genji. The climax of the utai (chant) in the first half of the drama includes names of chapters from The Tale of Genji. Also, in the Muromachi era people felt that the direct cause of Lady Rokujō’s jealous struggle with Lady Aoi was that she lost the fight for precedence for her carriage against Lady Aoi at the Kamo Festival. Following this interpretation, in the first half of the drama Lady Rokujō enters the stage riding on a broken carriage.