Savouring sushi and sake while enjoying a casual chat. 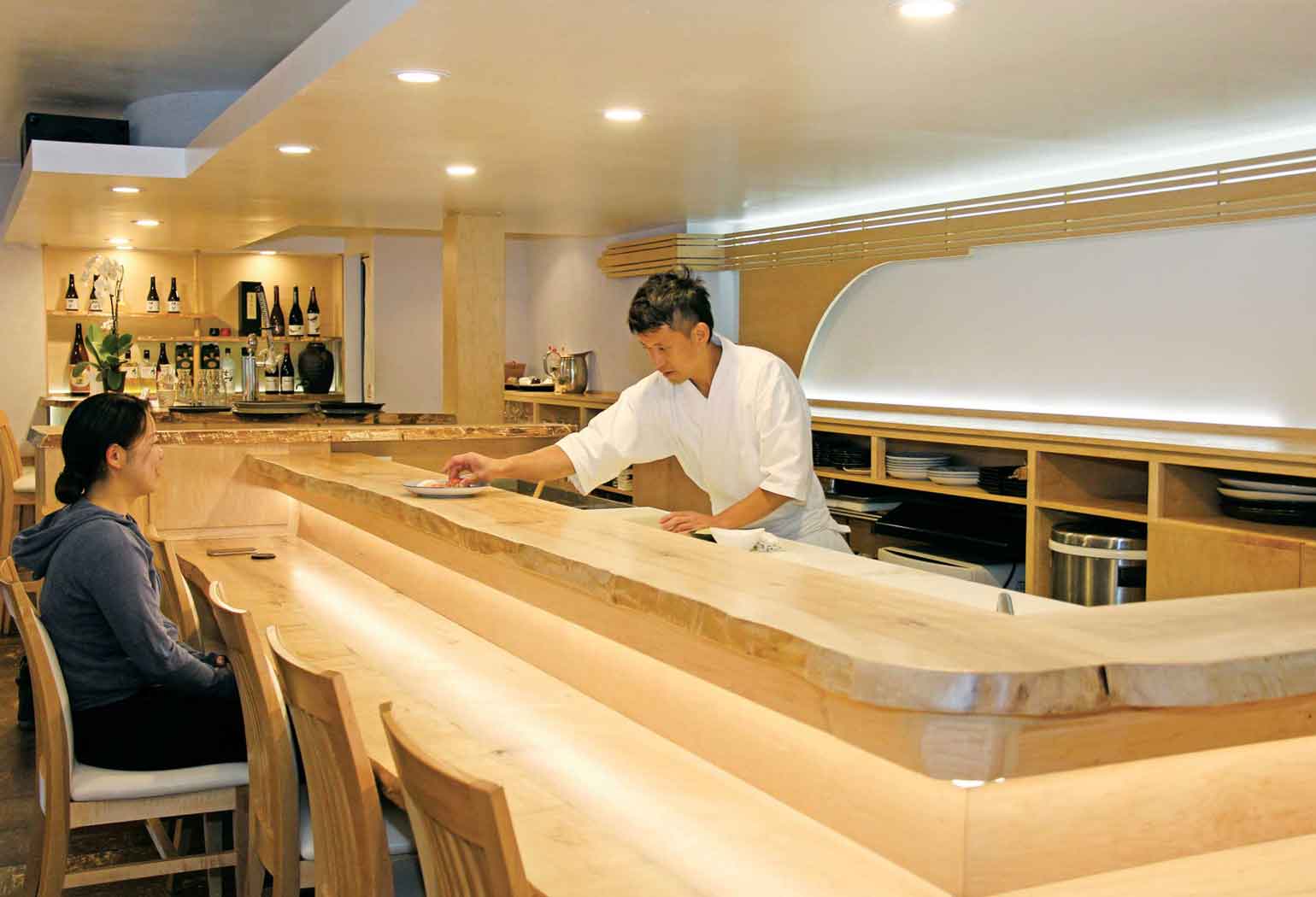 Located slightly east from downtown, this hidden gem is located at the basement of “Zakkushi”, a popular yakitori restaurant. In contrast to the energetic atmosphere upstairs, this place welcomes you with a warmth emanating from the wood used all around. With only about 40 seats, this well-maintained restaurant is definitely one of the places for those in the know.

The name of this restaurant is “Jugemu”, which also happens to be the title of a popular rakugo tale. Together, the letters (寿限無) signify “寿 (kotobuki) 限り (kagi-ri) 無し (na-shi),” which loosely translates to “eternal happiness and prosperity”. The restaurant is operated by the very group that also looks over “Zakkushi” and “Raijin”, a popular ramen chain. 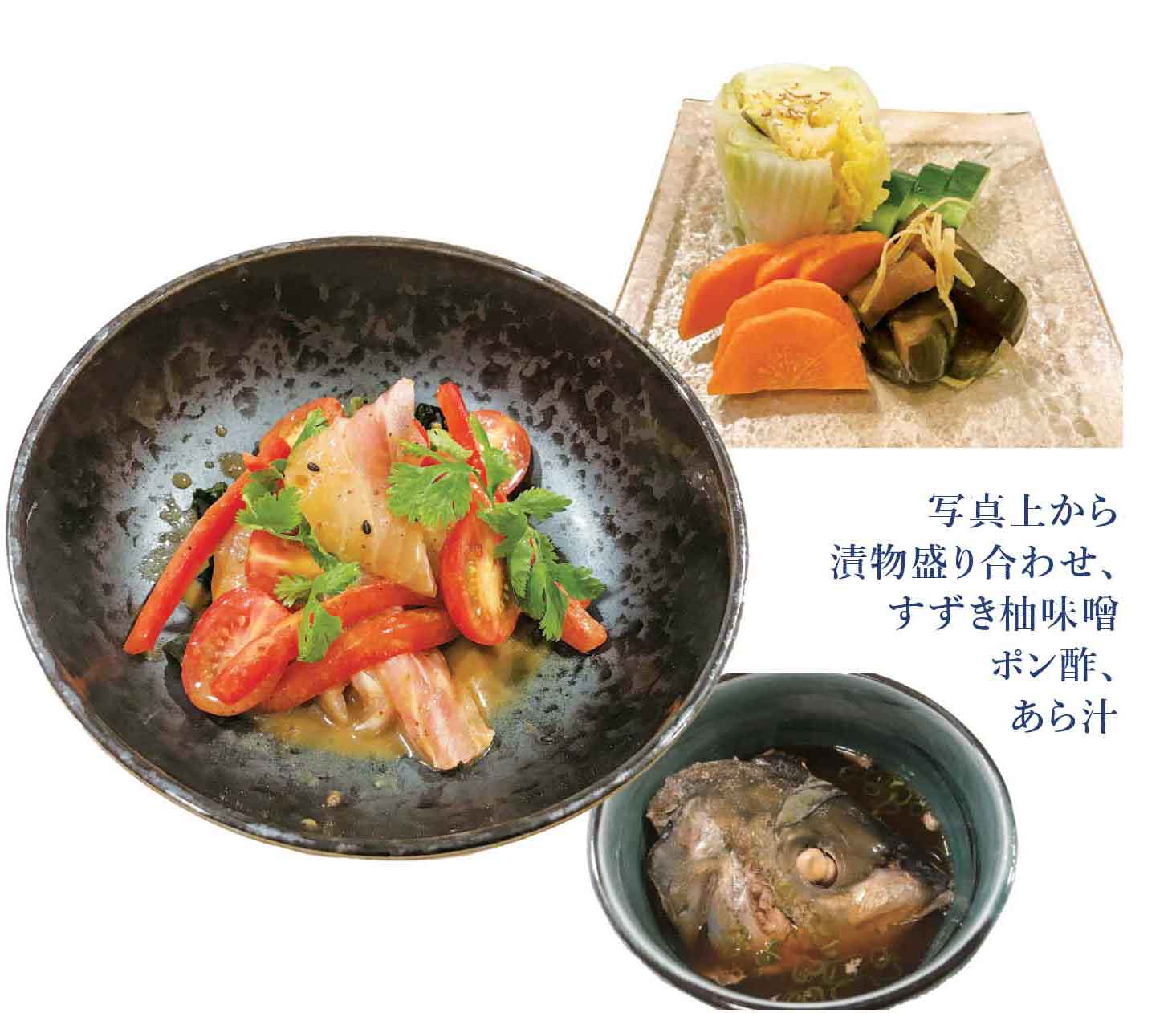 Chef Koji Tashiro glances over the shop while crafting his nigiri. If you’re a sushi fan in Toronto, you may have heard his name before.

Taking a look at the menu, you can see that apart from sushi, there is the omakase course, as well as tapas. With close to ten varieties, these small dishes are prepared by the chef to match drinks such as beer and sake. Drinks, he says, is another passion of his. The tapas comes in a wide variety: “fresh sea bass with yuzu pepper ponzu” and “marinated red shrimp with house-blend spicy sauce” are typical of sushi restaurants. “Marinated cream cheese with house-blend soy sauce” and “tsukemono”, or homemade pickles, are also on the list. While they are simple in flavour, these serve as great companions to your cup of sake. 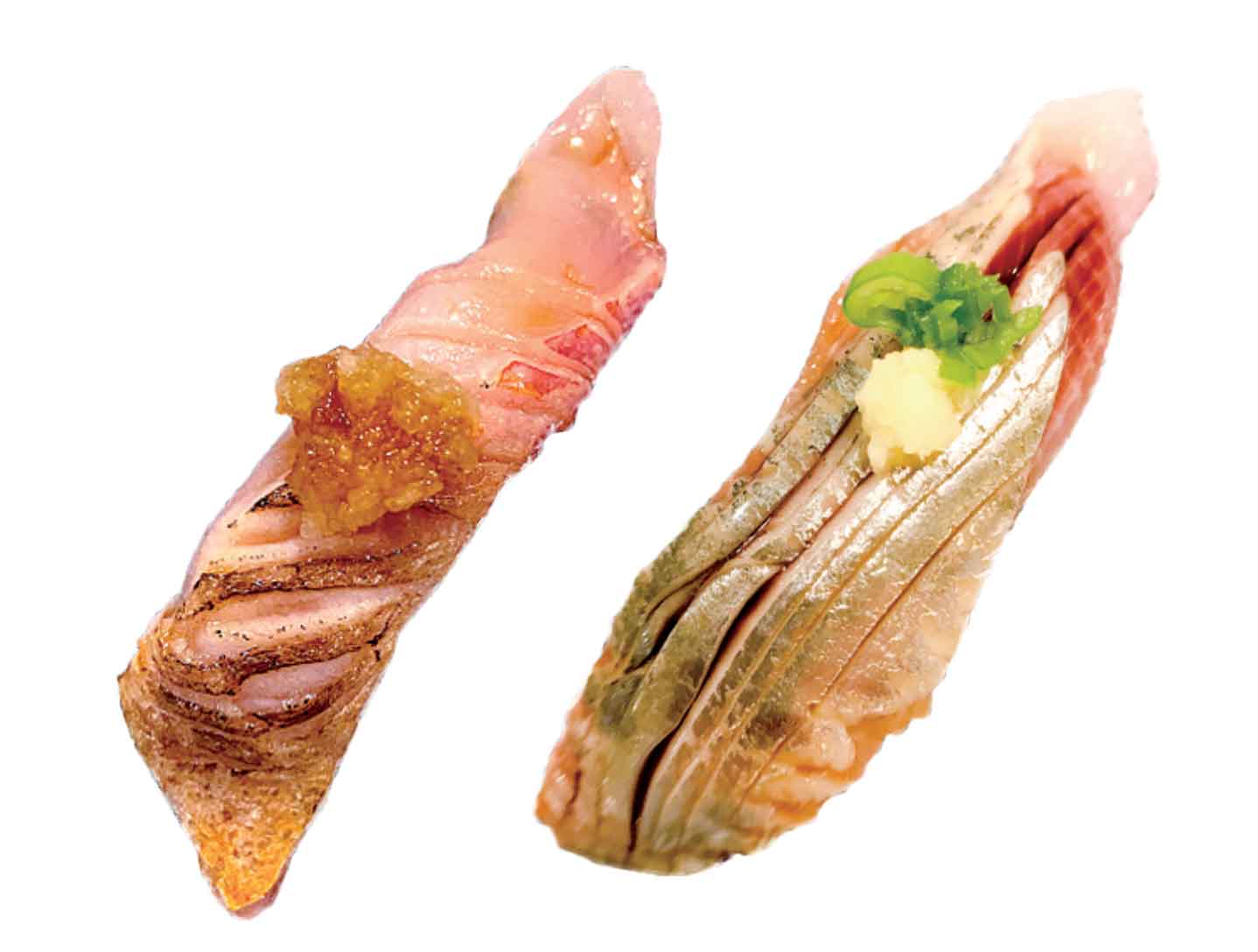 Jugemu’s sushi selection, starting with maguro (tuna), shiromi (white fish), hikarimono (blue-backed fish), includes 20 different types. To those who are connoisseurs of sushi, you will be delighted to find a range of hikarimono (literally translates to shiny ones, meaning fish that are silver in color) such as saba (mackerel), iwashi (sardine), aji (horse mackerel), kamasu (barracuda), and kohada (gizzard shad). Though the bluefin tuna is imported from Mexico, most of the tuna from here are of high enough quality to be exported for consumption in Japan. Apart from tuna, however, most of the fish are delivered fresh from Japan. When asked about his standards of selecting his fish, chef Tashiro responded, 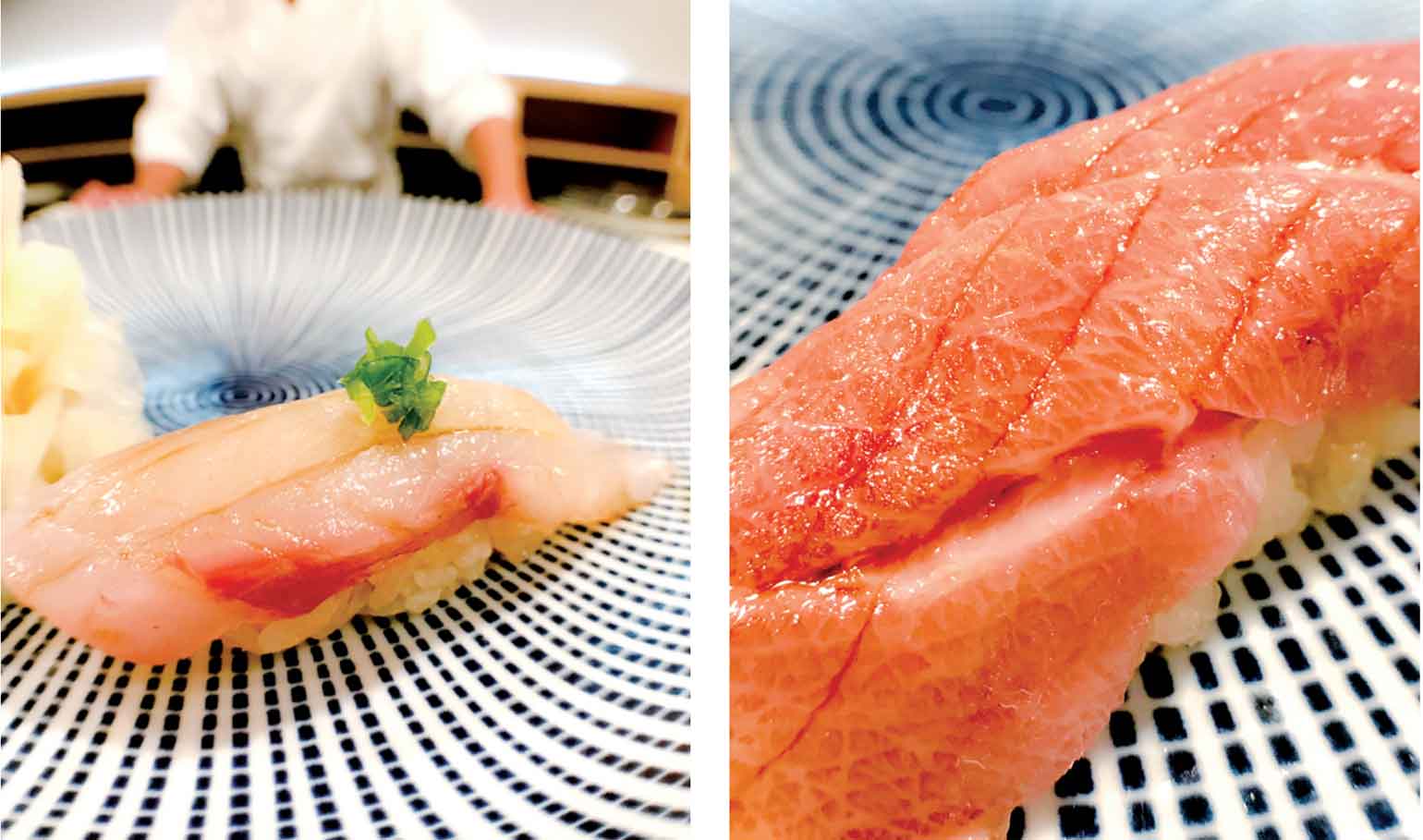 “Actually, it doesn’t necessarily mean that the fish is good just because it’s from Japan. Nor does it mean that I’m only choosing fish from Japan. Sometimes, fish from Portugal or New Zealand are better than the ones from Japan. However, on average, fish from Japan is superior in terms of processing and logistics, and as a result, they are much easier to handle and are safer, too. The condition of the fish is crucial when making sushi and sashimi. As I mentioned, fish from outside of Japan—including those that were locally fished—are not as good in terms of how they are processed, so I end up using more fish from Japan as a result.” That’s one big proof right there that he knows about his fish.

“Craftsmen must be honest to be liked.” 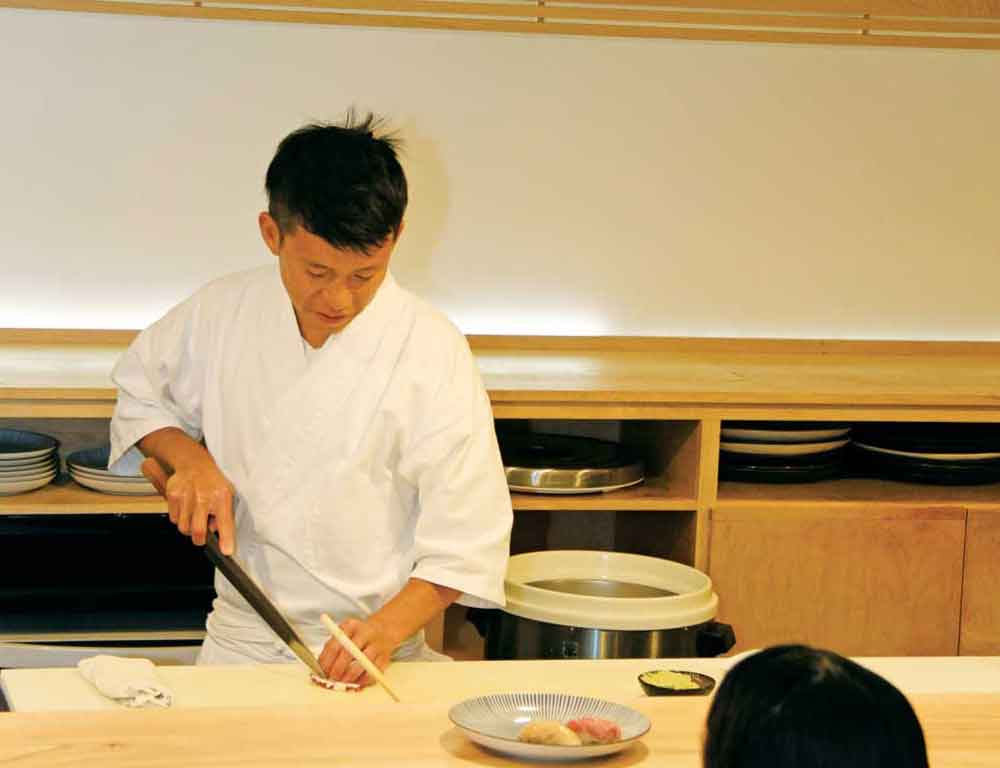 His attitude, as we see across the counter, is light and upbeat. His unwavering values and beliefs as a shokunin (craftsman) can be observed through his words.

“We use the koshihikari brand for our rice, which has its very own flavour. On top of that, though, our sushi vinegar is a blend of four different vinegars, with akazu (red vinegar) at the core. We are constantly searching for the best balance in the blend, so that it brings out the flavour of the fish as well as the texture of the rice. As for the nori (seaweed), although we don’t use the top-notch nori that’s used by the high-end sushi restaurants markets in Toronto, we choose nori that has a flavour and aroma similar to those.” His honesty and dedication towards the quality of ingredients makes it easy for us to connect with and appreciate the chef. 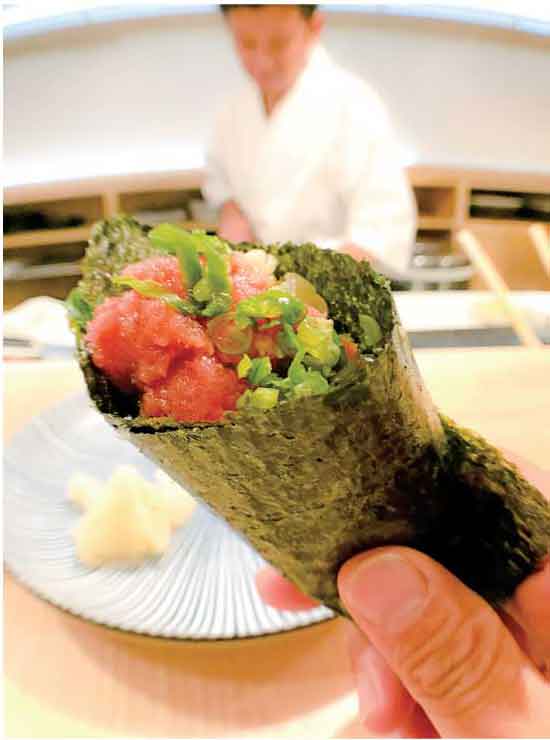 When asked about how best to enjoy sushi at Jugemu, he responded,

“People from all over the world come together here in Toronto. Many who are knowledgeable in sushi tend to go for the not-so-mainstream choices, whereas others who are not as knowledgeable tend to go for the fatty fish, which are always a good choice. Because there’s such a variety, I make sure there’s always a balance. Otherwise, I would say just go for whatever you like. I’m very much aware that hikarimono isn’t everyone’s favourite just because it has a distinctive smell, but I always carry a wide selection of it anyway—simply because it’s my favourite, to be honest.”

Tashiro chef’s sushi is served with a generous spread of nikiri shoyu, a type of soy sauce created with a blend of soy sauce, water, sake, mirin, and dashi (stock).

“For the soy sauce, we add dashi made from katsuo (bonito) so that we add umami and depth of flavour to the sushi. It’s not always popular among customers who want to enjoy the flavour of the fish itself, but I believe that the flavour of the bonito makes it easier for the people here, particularly if they’re not familiar with sushi, to get accustomed to the flavour of the sushi,” the chef told us of his firm beliefs.

“Perhaps there are people who are not used to spending time drinking at a sushi restaurant, or people who are nervous doing so. That’s why I thought about what I would like to eat while drinking and incorporated them in the menu.”

Tashiro chef surely enjoys serving food that he likes, even if that means spending time on preparation, as it is the case with fish like kohada and anago. The omakase course, which has its fans among sushi lovers in Toronto, comes in three portions: you can choose from 12, 8 or 5 pieces of sushi, depending on how much you are craving. He also informs us that he makes sure that the variety strikes a good balance. For those who need a little more than the omakase, there are small donburi available, like negitoro-ikura (tuna and salmon roe) don and kouhaku (red-and-white) seafood don. 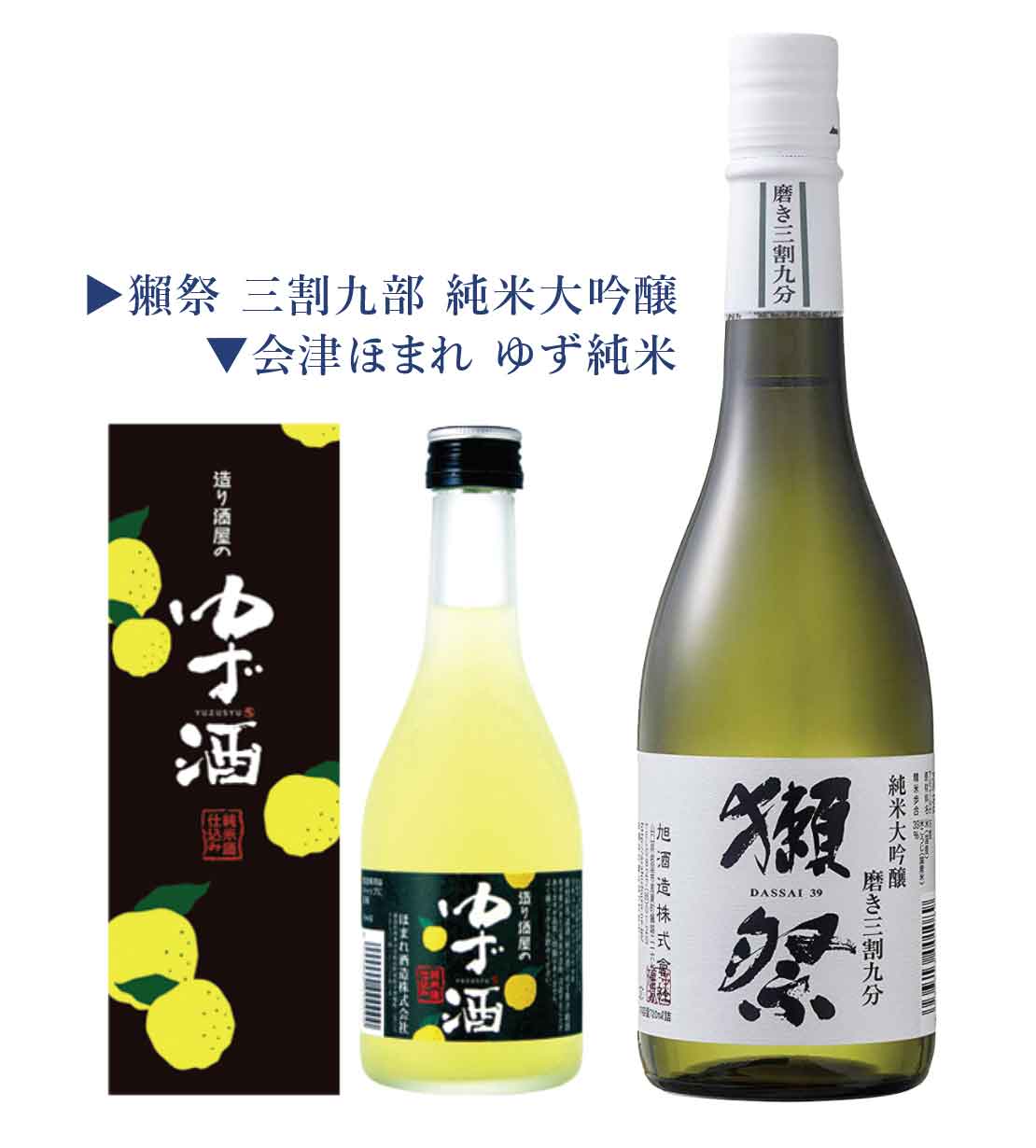 Of course, sushi’s best companion is sake. At Jugemu, eight brands of sake are available. “Aizu Homare Yuzu Junmai” is one with a perfect balance between the mellow flavour of rice and the fresh aroma of yuzu citrus, topped with a hint of sweetness. Perfect for an aperitif, this sake is also for those who may not be huge fans of sake, or those who may not be too familiar with the taste of it. Now a world-renowned sake brand, “Dassai” is also part of Jugemu’s sake repertoire. Its “Sanwari-Kyubu Junmai Daiginjo” has the fragrance iconic of a junmai daiginjo sake, and its honey-like sweetness lingers on the palate for a while. It’s the perfect companion for a slow-paced sushi dinner.

“The other day, a customer asked for another dish of my homemade pickles. It made me so happy to know that the customer enjoyed the most simple thing on the menu.”

“I see myself as someone who is still at the bottom, with so many more levels to climb. Knowing that somebody enjoys—even just a little bit—what I make and knowing that I can make that possible is a miracle of sorts. I always tell myself to never forget that humility, and to “continue” with it, not necessarily “achieve” something.” The chef also added that he hopes Jugemu to be a place of perfect balance: somewhere not too special that you need to dress up, but a place where you want to bring someone special.

Whether you let your mind wander with your sake in one hand as you observe Tashiro chef create his masterpiece, immerse yourself in a conversation with your significant other over food, or engage in a conversation with chef Tashiro while savouring your favourite sushi and sake (which we highly recommend), Jugemu is a perfect place for any occasion. When you come here, you know there’s something good waiting for you—so why not take a chance and step inside this hidden gem?