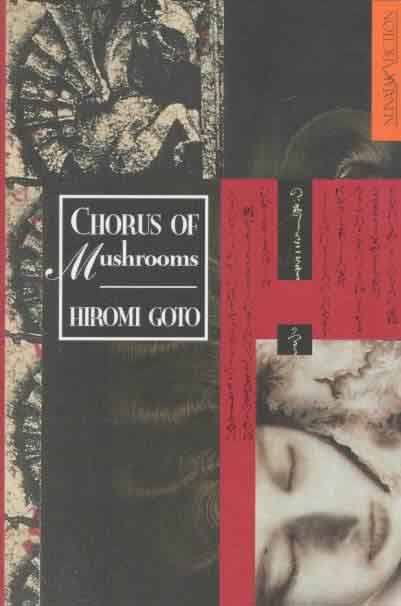 Mukashi, mukashi, omukashi… . ”Ahhhhh this unrelenting, dust-driven, crack your fingers dry wind has withered my wits, I’m certain” begins this excellent work by Hiromi Goto; she tells a “true” story with interweaving, cross-locking narratives, much like the spider webs that populate her dusty Alberta prairie town of Nanton.

This is a story of three-generations of women (challenging the Japanese patrilineal system of descent, where only the male descendant’s story is recognized): there is Naoe, the immigrant grandmother; Keiko, the silent mother who has given up her Japanese heritage to assimilate to white Canada, and Murasaki, the granddaughter, who discovers her voice through the telling of this story.  The main drama of the story, if you can even call it that, comes from the grandmother’s sudden departure; Keiko is left depressed and wordless and Murasaki is left to tend to her, opening up space for a slow dialogue between the mother and the daughter. The grandmother’s departure may have been a “true” event–one can never know, reality and fiction blend in and are indistinguishable–but granny Naoe’s adventures are told in a light and fantastical way; granny Naoe conquers old age through Goto’s magical realist touch.

While I was reading Chorus of Mushrooms, I was reminded of Roland Barthes’ Writing Degree Zero. Formal variations in French letters happened because the unified French consciousness was dispersed through some revolution in the 19th century; form is influenced by materialist transformations. Goto’s multi-narrative tale is, perhaps, the diasporic consciousness’ attempt to find a formal means of expression.  Granny Naoe has not lost her Japanese tongue, and so she is the greater teller of stories in the novel. Keiko, the assimilated mother, is silent; she has lost her ability to express herself and tell stories, as she has forced herself into the mainstream Canadian consciousness in which she stands in a marginalized position. Murasaki-Goto slowly finds her own ability to tell her own stories through the novel.

“I rise from our great purple futon like someone who has been sleeping for decades. Step through the open door. Away from a room filled with the lingering echoes of spoken and unspoken tales. You know you can change the story.” As she writes these final lines, is the diasporic consciousness born?