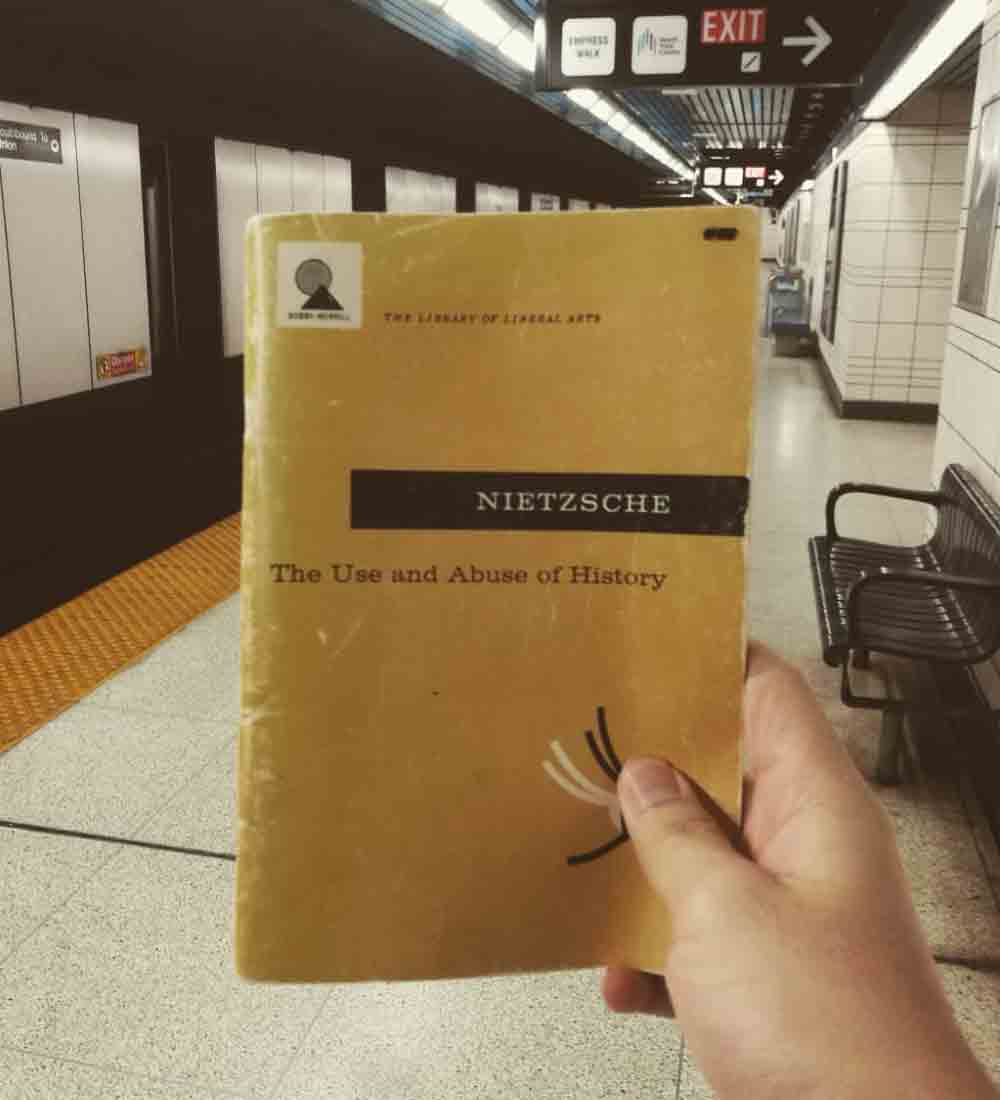 I was a little bit worried about this edition. In the Editor’s Introduction, the editor criticizes Nietzsche’s “gospel of the will to power” as something that has “unleashed bestiality in the name of the sanctity of the animal in man.” The translator, translating Nietzsche’s Preface, translates “untimely” as an awkward “out of season”–a few pages later, I noticed this sentence: “…a living thing can only be healthy, strong, and /productive/ within a certain horizon…”; I doubt Nietzsche would have used such a utilitarian word as “productive.” This book, in other words, was published in the pre-Kaufmann era of Nietzschean scholarship; I was worried that it would be a crude mischaracterization.  I didn’t have to worry; this work was an interesting addition to my own knowledge of Nietzsche and provided some truly interesting Nietzschean concepts to think through.

Nietzsche begins with the concepts unhistorical and superhistorical. The beast “lives unhistorically; for it ‘goes into’ the present … without leaving any curious remainder”–the human loses his capacity for oblivion as he steps out of childhood and learns what “existence really is–an imperfect tense that never becomes a present” (wow!). A surfeit of history is a burden on man’s shoulders, it brings weariness and “forgetfulness is a property of all action.” However, it is only by overcoming the unhistorical that the human becomes human–this reminded me of Nietzsche’s comment in the Genealogy of Morality (that goes something like this) that it was only through ressentiment and resulting depth that man becomes an interesting animal. So both “the unhistorical and the historical are equally necessary to the health of an individual, a community, and a system of culture,” and only by suppressing the unhistorical can the human put history to use for the present.

Nietzsche’s “super-historical man” sees “no salvation in evolution … sees the world is complete and fulfills its aim in every single moment … the past and the present are one and the same, typically alike in all their diversity and forming together a picture of eternally present imperishable types of unchangeable value and significance”–the super-historical man has achieved supreme wisdom and reads the text of history with the divine key. Nietzsche does not envy this figure; “we will leave the super-historical men to their loathings and their wisdom” he says, “we wish rather today to be joyful in our unwisdom and have a pleasant life as active men who go forward and respect the course of the world.”

How to put history for the service of life? Nietzsche identifies three relations man has to history: “in relation to his action and struggle, his conservatism and reverence, his suffering and desire for deliverance”–these form the three kinds of history, “the monumental, the antiquarian, and the critical.”

The monumental history is an elitist history, it is a dialogue between superior human beings who form a chain throughout history (this reminds me that one T.S. Eliot quote about the artist and his relation to the past). It inspires those untimely people who strive for greatness by providing them with examples outside of their time. This is a mythic history: “Only if the earth always began its drama again after the fifth act, and it was certain that the same interaction of motives, the same deus ex machina, the same catastrophe would recur at particular intervals, could the man of action venture to look for the whole archetypical truth in monumental history, to see each fact fully set out in its uniqueness: it would probably not be before the astronomers became astrologers again.” As such, it is not a history of causes, it describes the monumental “effects in themselves” at the cost of an explanation of the causes.

The antiquarian history is a for the “conservative and reverent nature who looks back to the origins of his existence with love and trust”–this is a history for the Chinese peasant as was described in “From the Soil” by Fei Xiaotong–but these conservative spirits run the risk of rejecting everything new for the antiquarian: “if the judgement of a people hardens in this way, and history’s service to the past life is to undermine a further and higher life; if the historical sense no longer preserves life, but mummifies it… Antiquarian history degenerates from the moment that it no longer gives a soul and inspiration to the fresh life of the present.” The antiquarian history cannot create life, it can only preserve it, it lacks the creative vitality of the monumental history.

The third and last way, the “critical” way, is also in service of life. It is a retrospective reinterpretation of the past, with which the present can break free of its unchosen inheritance. Through the critical way “we plant a new way of life, a new instinct, a second nature, that withers the first.”

With these categorizations Nietzsche analyzes and condemns the study of history in his present; the modern study of history in his time attempts to be a science, an objective manner of seeing–this “excess of history” (p.28) suffocates life. Unfortunately, this post is already too long and I am too tired; I would recommend reading this essay, even if for Nietzsche’s provocative writing.