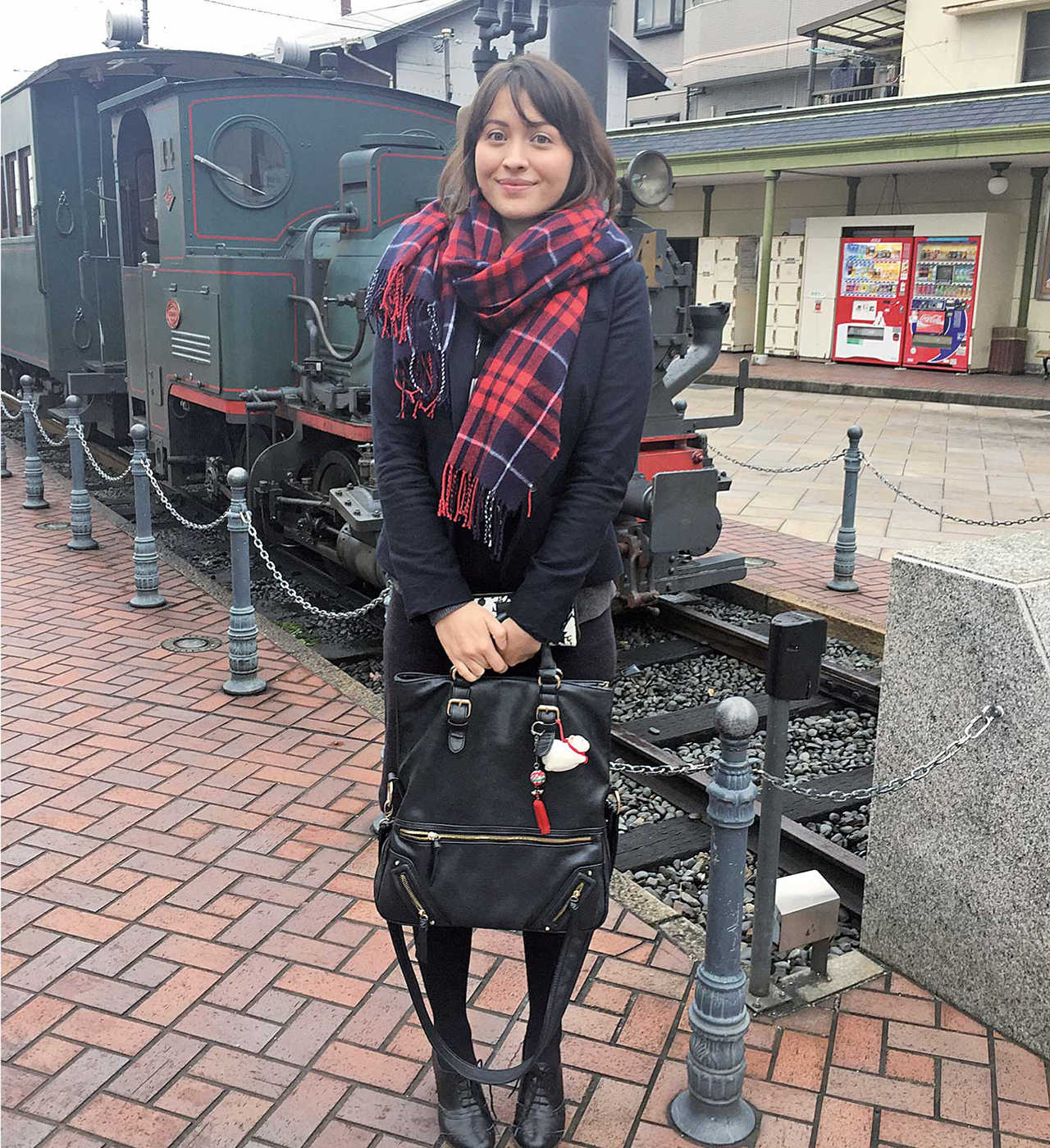 Stephanie Erica Chaves is currently part of the JET program and works in a high school in the city of Matsuyama as an Assistant Language Teacher (ALT). She is also the winner of the Soseki International Essay Contest (hosted by Asahi Shimbun, Iwanami Shoten, The Japan Foundation, and Ferris University), a competition that was held in 2016 to mark the centennial of the death of Natsume Soseki, a world-renowned Japanese author. He is also the reason why Stephanie began studying Japanese. In this interview, we ask Stephanie about the beauty of Soseki’s literature that transcends languages, her passion for the Japanese language, and her prospects for the future.

What is your favourite poem in the English version of “Hyakunin-isshu”?

It’s hard to make a decision since there are so many great ones, but if I had to choose, it would be the one written by Izumi Shikibu. Peter MacMillan did a wonderful translation of it: “As I will soon be gone. / Let me take one more memory / Of this world with me. / I hope against hope / To see you one more time, / To see you know.” Through this poem she expresses her desire to see her loved one last time before she dies. I am a romantic person myself, and I think this poem is beautiful.

How would your life have been different if you hadn’t encountered the works of Soseki?

I can’t say for sure, but I probably wouldn’t have participated in the JET program and would have been pursuing my master’s degree instead. I’m also a fan of medieval English literature, particularly those about King Arthur, so I think I would have been studying those as well.

You said that your personality resembles that of Natsume. What kind of person do you imagine him to be?

I would imagine him being introspective as well as observant. The most interesting part of his literature is how there is a mixture of melancholy and comedy, particularly in his later years. His literature is full of wit, so I would believe he had a great sense of humour.

I think American culture has a huge impact on Japan. There’s a lot about the US presidential elections on TV, and when I’m in Japan, many people ask me what I think of the country. My students at Matsuyama High School often talk about celebrities, and music and TV shows from the United States, too.

What’s the most memorable story or line from Soseki’s works?

The part in “Kusamakura” where the protagonist Yo observes a camellia falling into the pond is a memorable one. I often think about this scene, even now. The reason why I really like it is that “Ophelia” by John Everett Millais appears in it. It’s one of my favourite paintings. Soseki portrays it vividly and with so much detail that I am able to picture it perfectly in my mind.

What was the biggest challenge when studying Japanese?

Grammar is always a challenge for me, even though I enjoy learning Kanji and words. In particular, I struggle a lot with particles. I think the most important part when learning a language is to continue studying and believing in yourself, even when you’re stuck, and to not worry too much even if it takes a long time to learn. You also need to make sure you put the words and grammar you learned to practice and use them in an actual conversation. I actually find that part very enjoyable. Of course, I make mistakes, but you wouldn’t learn otherwise. Making a mistake is necessary in moving on to the next step.

Is there anything in Japan that you wish Canada had?

“Kotatsu” for sure. It makes me happy to go home in the winter, and I even sit in the kotatsu when I study. I don’t think I can survive the winter any longer without a kotatsu. Disposable hot packs are another thing that I want to take with me to Canada. There are many kinds out there, but I especially like the ones you put in your shoes to warm your feet. I don’t think waiting for the bus or the train would be a problem if Canada had them too. Melonpan is also a big one. I simply enjoy going to the bakeries here.

Was there something about Japan that you hadn’t expected?

Everyone is polite in Japan, but what I didn’t know was that the politeness sometimes makes it difficult to become closer with one another. Luckily, I was blessed with many friendships in Matsuyama, and thanks to them I am able to call Matsuyama my second home. Everyone I have met here are warm and friendly. I feel very fortunate for being able to live here.

What are some things you wish to do during your JET program? Do you have any goals or prospects for the future?

Currently, my goal is to support my students at Matsuyama Central High School so that they can come in first place at the English debate contest. My students enjoy studying English, and we spend a lot of our time giving speeches and debates in English. I’m hoping that this competition will motivate them to further study English.
As for myself, I would like to continue studying Japanese. More specifically, I am studying for the N1 (highest) level of the JLPT exam so that I can translate Japanese literature into English. It was always a challenge for me to look for English translations of Japanese literature, so I want to make them more available for people like me. Japanese literature has a long and fascinating history just like the country itself, so I want to share it with as many people as possible.

Lastly, please give a message for the readers of TORJA!

First, I would like to advise everyone to make as many friends as they can. I would recommend starting by joining a team or a club within your community that interests you. Having conversations with the people you meet there is perhaps the easiest and the most enjoyable way to learn a language. Never be ashamed of your conversational skills, regardless of your proficiency. Whether you are fluent or not, what doesn’t change is the fact that you have spent your time and effort studying the language, so be proud of it. Also, the more mistakes you make, the better you will become. Lastly, travel as much as you can. Take Canada for example. It’s a huge country, and there’s so much to see. I’m sure there is an adventure waiting there for you.

Hyakunin-isshu: an anthology of 100 poems by 100 authors. Literally translates to “100 people, 1 poem”, signifying that all of the authors wrote a poem each.

Kotatsu: a piece of furniture that combines a tabletop and a futon. Accompanied by an electric heater on the inside.

Melonpan: a sweet bun topped with a cookie dough and sprinkled sugar. Similar to pineapple buns found in Chinatown. Name derived from its appearance, which resembles a melon.

Born 1989 in Canada. First encounters the English edition of “Hyakunin-isshu” upon recommendation by her high school teacher, which sparks her interest in the Japanese language. During her time at the University of Toronto, she comes across works by Natsume Soseki and delves further into Japan its literature.