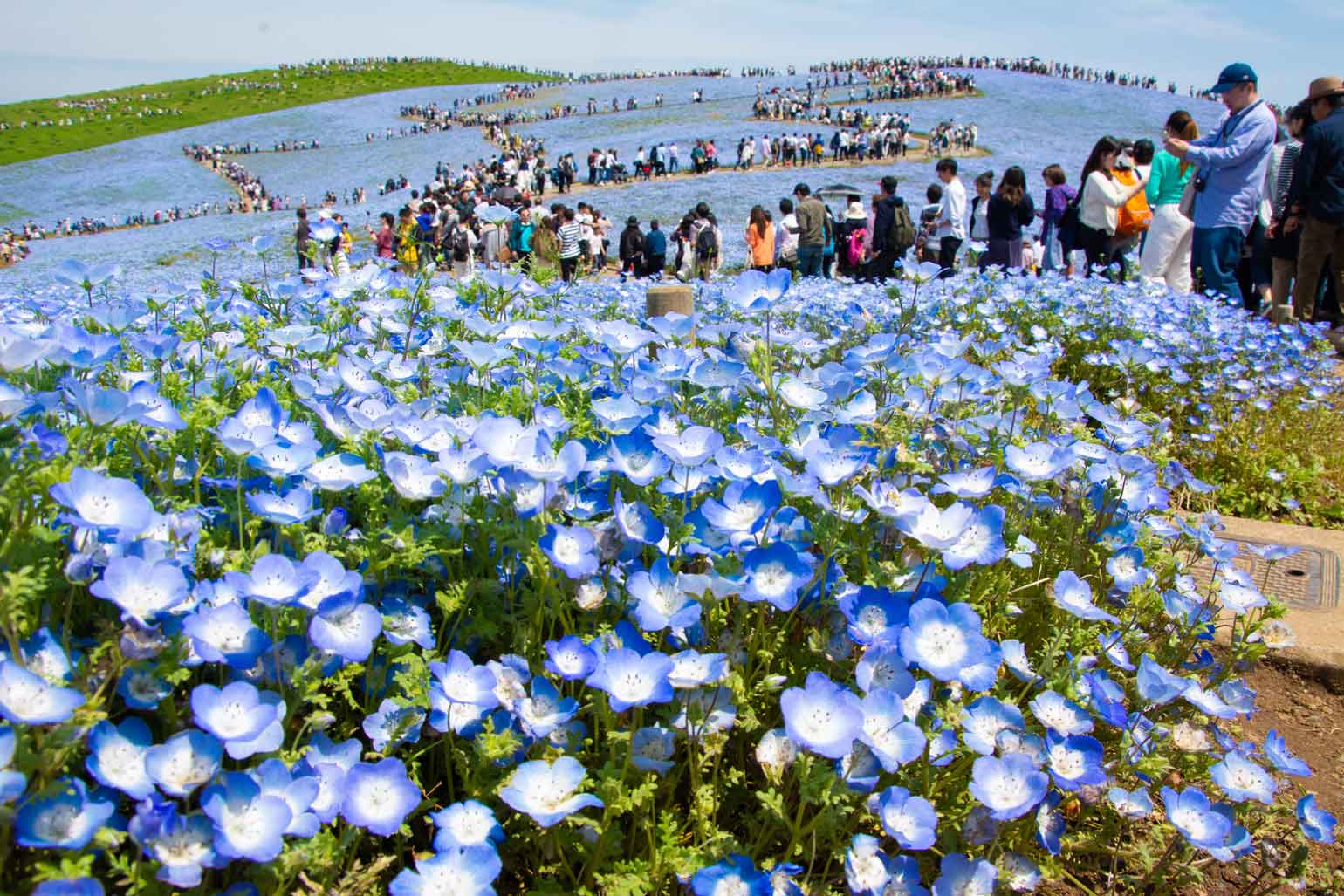 Located in the area facing the Pacific Ocean, in the city of Hitachinaka, Hitachi Seaside Park (ひたち海浜公園, Hitachi Kaihin Kōen) is a spacious park in the Ibaraki Prefecture, featuring a variety of green spaces and seasonal flowers spread out across 350 hectares, as well as an amusement park and several cycling and walking trails.

Throughout the year, in the well-kept garden, there are a variety of beautiful flowers; in spring, there are narcissuses, tulips and Nemophila (baby blue eyes) and in early summer, the poppies and roses bloom, zinnias and sunflowers bloom, attracting visitors from around the world. In the autumn, you can enjoy the company of the Kochia (summer cypress) that gradually changes shade throughout the season. In the winter, there are ice tulips. In the Pleasure Garden, the Ferris Wheel standing on 100 meters above sea level offers a great view of the garden. 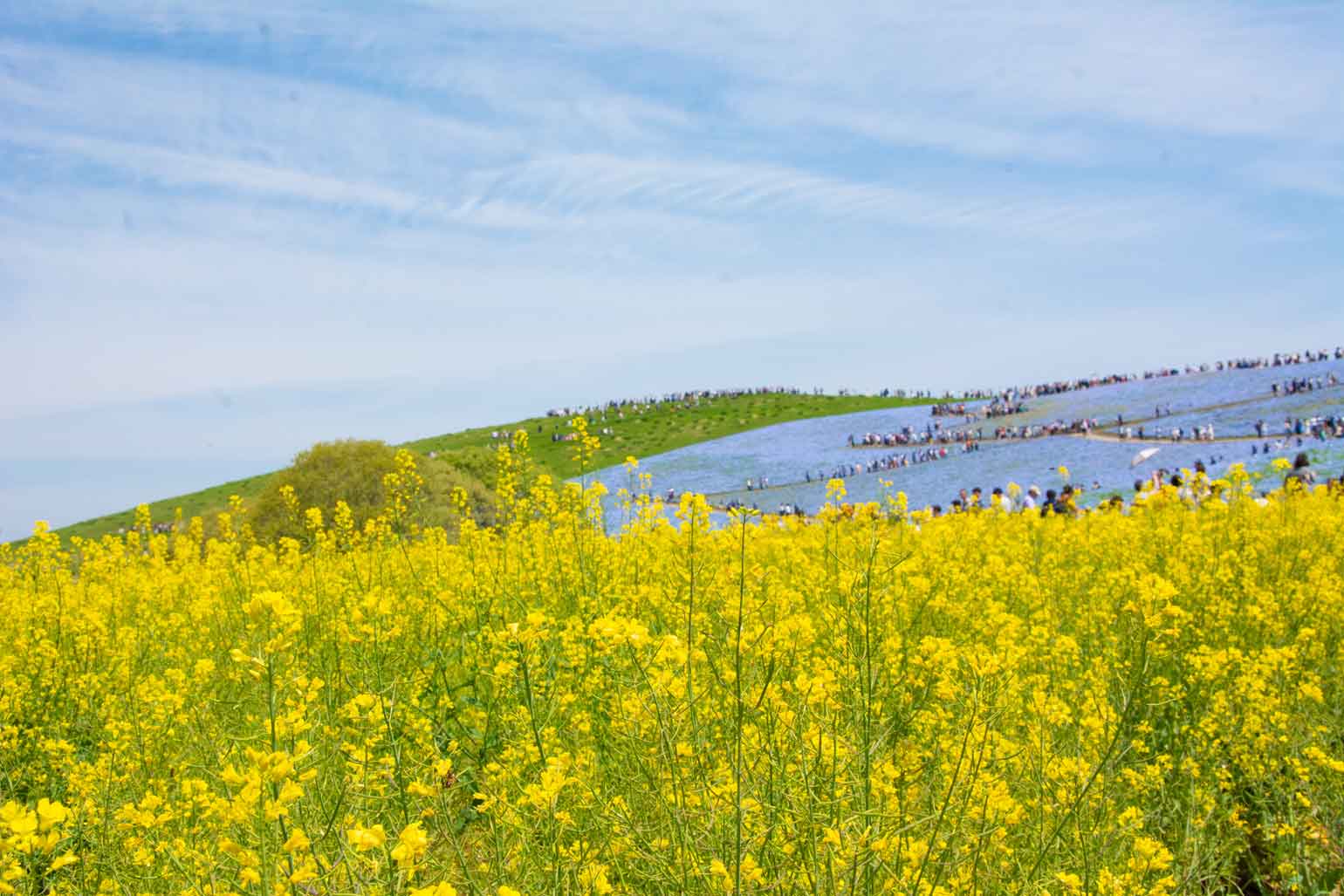 The view of nemophila in the spring and Kochia in the fall on the Miharashi Hill is wonderfully peaceful; that, however, was not always the case. The hill used to be the Mitohigashi Airport, a military airport, and after the war it became a firing and bombing range for the US Air Force. There were several serious problems caused by accidental firing and bombing; some people were killed by the accidents. Therefore, local residences wanted to take the airport back from the US army. Finally, the land was returned to Japan in March 1973 and later it became the Hitachi Seaside Park, a symbol of peace. The hills, where many bombs and bullets had been fired, is now a hill covered with flowers.

The park’s main attraction is the blue nemophilia that covers the Miharashi Hill in spring, mimicking on the earth, the color of the sky. The flowers blossom in late April to mid-May. As one walks through the paths that crisscross the hills, one can view the Pacific Ocean from above. In the fall, the hill is covered by green kokia bushes which slowly turn red as the weather becomes cooler. These autumnal colors are usually at their aesthetic peak from early to mid-October.

Nemophila is an annual herb that is native to North America; in Japanese, it is called, Rurikarakusa. nemophila is 20 cm tall and each flower is 2 to 3 cm in diameter. Usually, the small flowers are planted to play a “supporting role” in a garden. However, in this park the blue flowers cover the entire hill, creating a special view with the sky and the ocean. 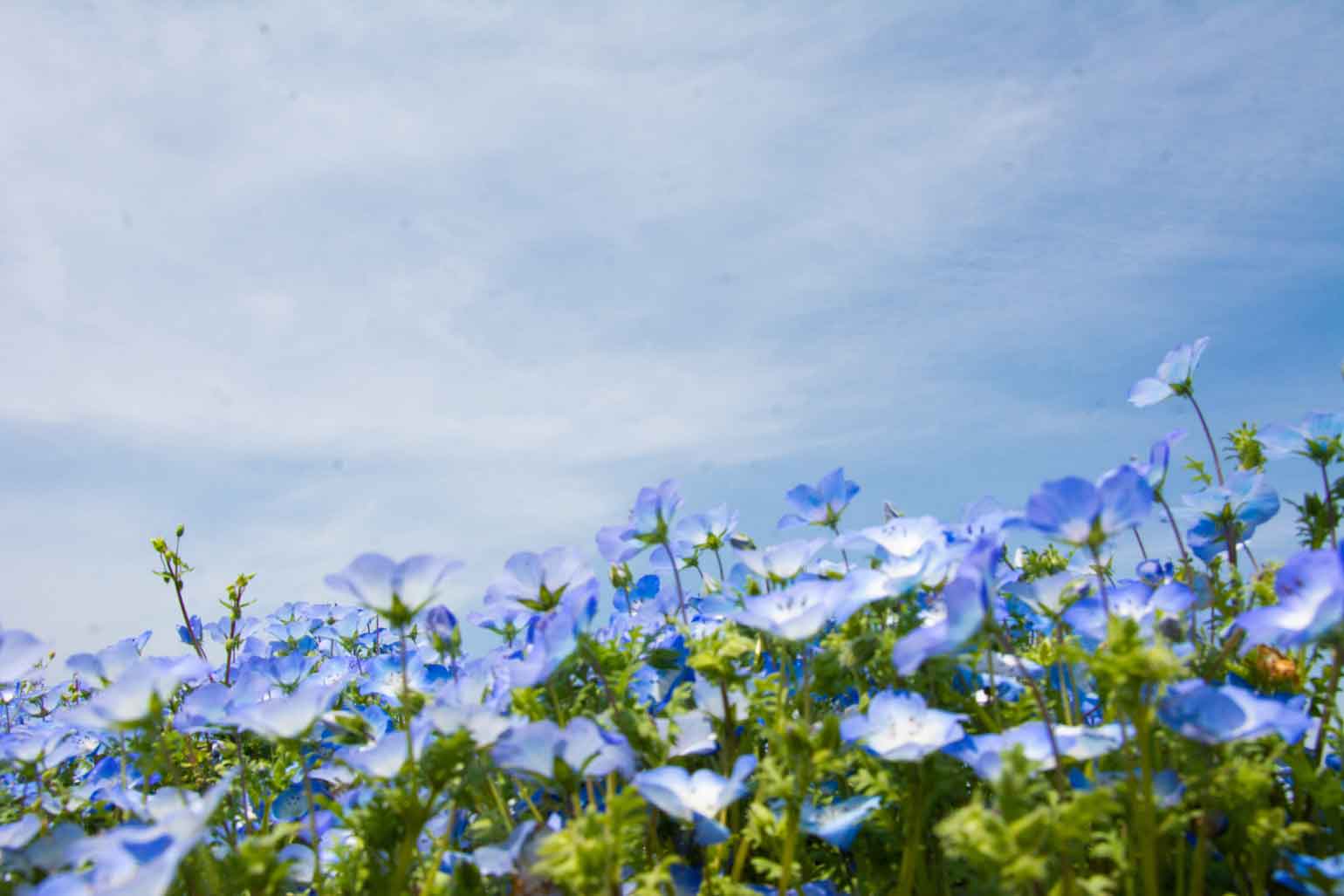 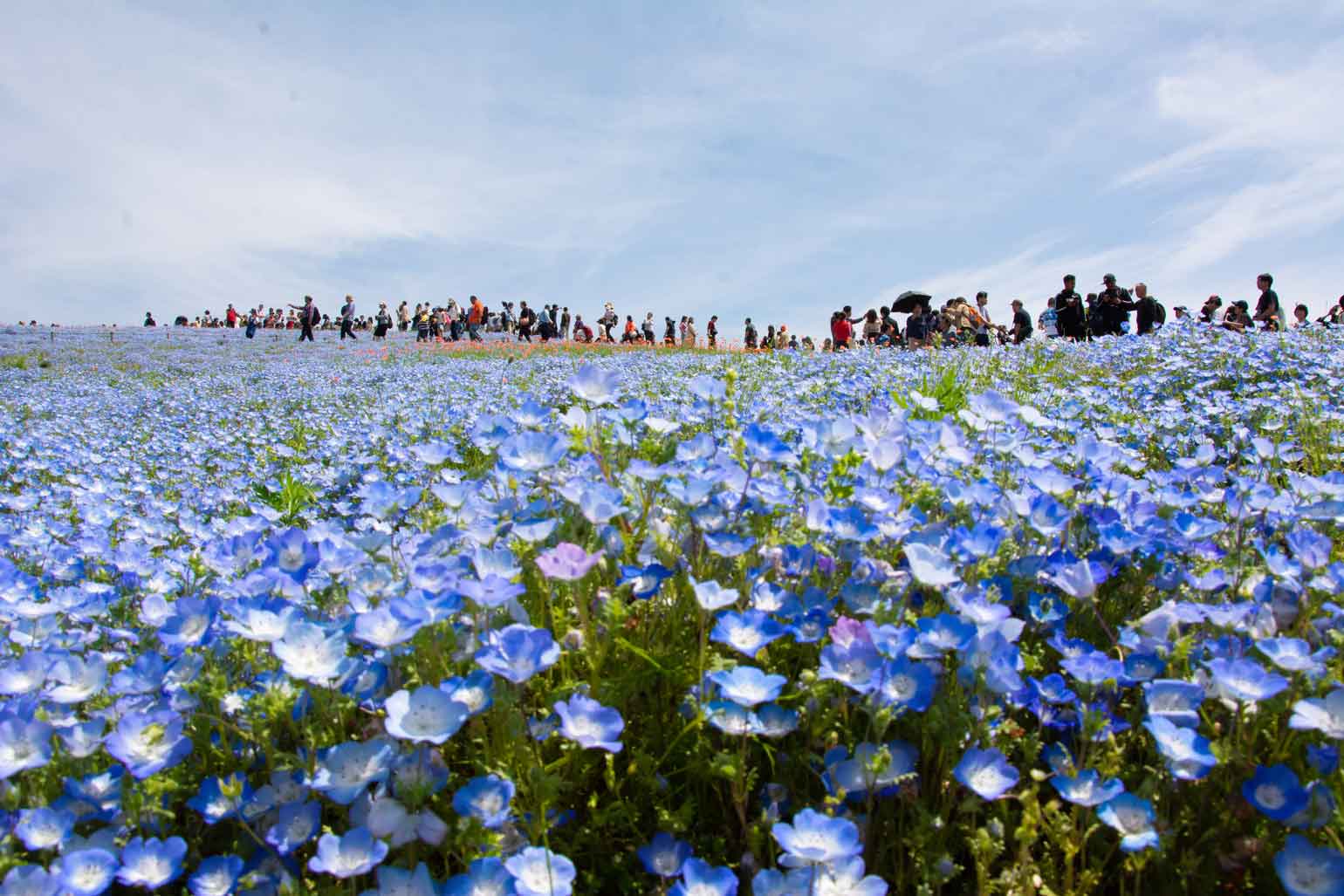 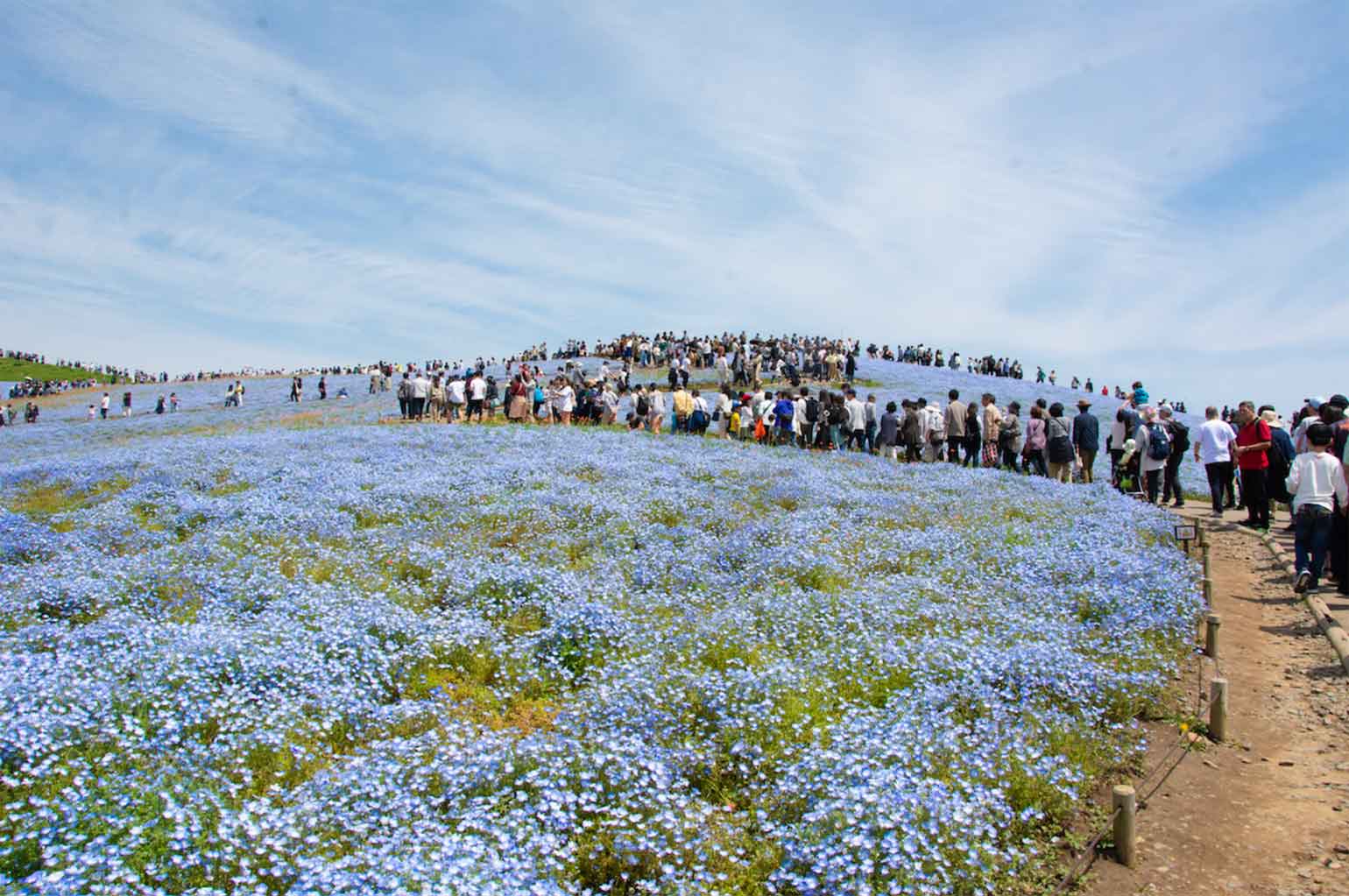 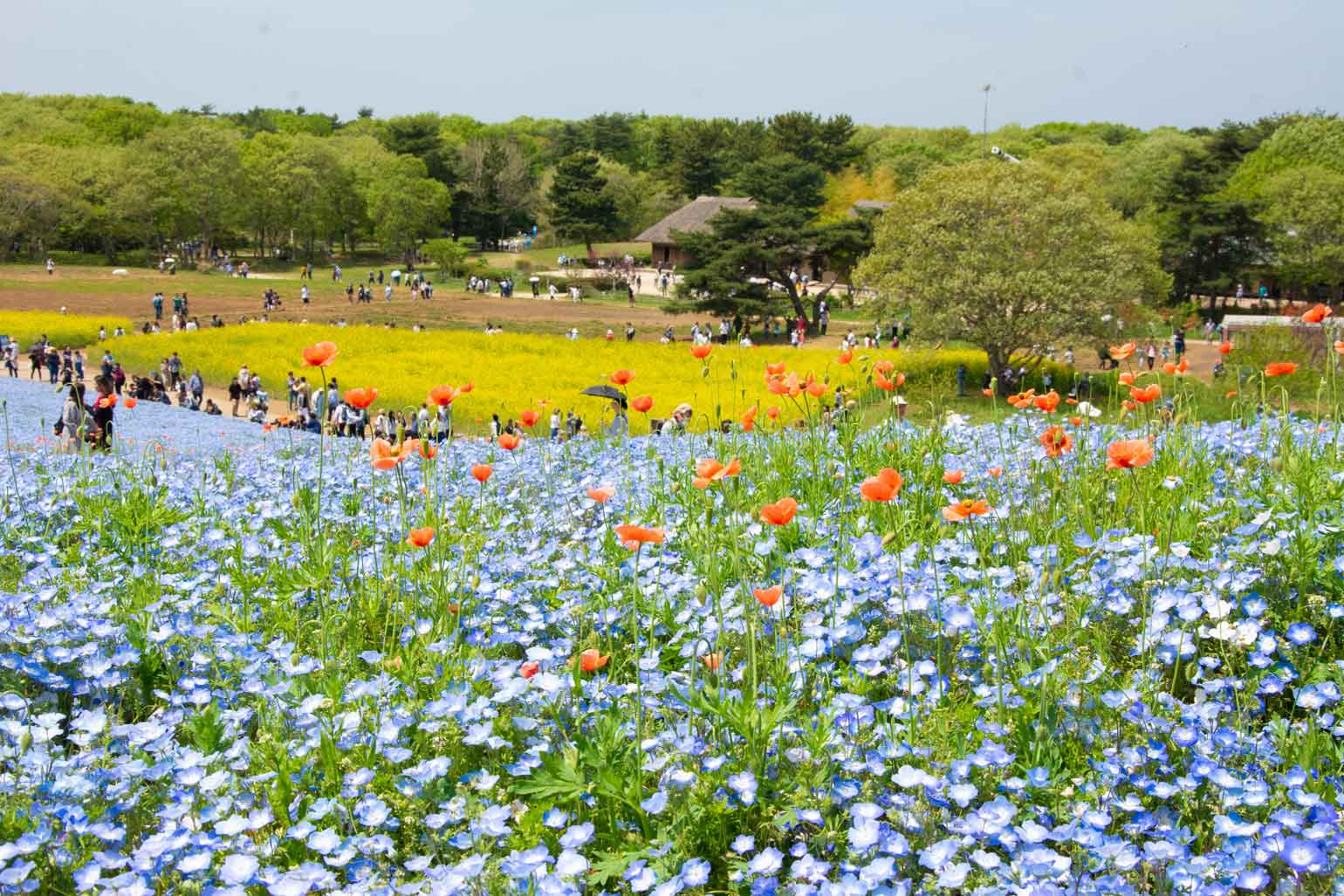 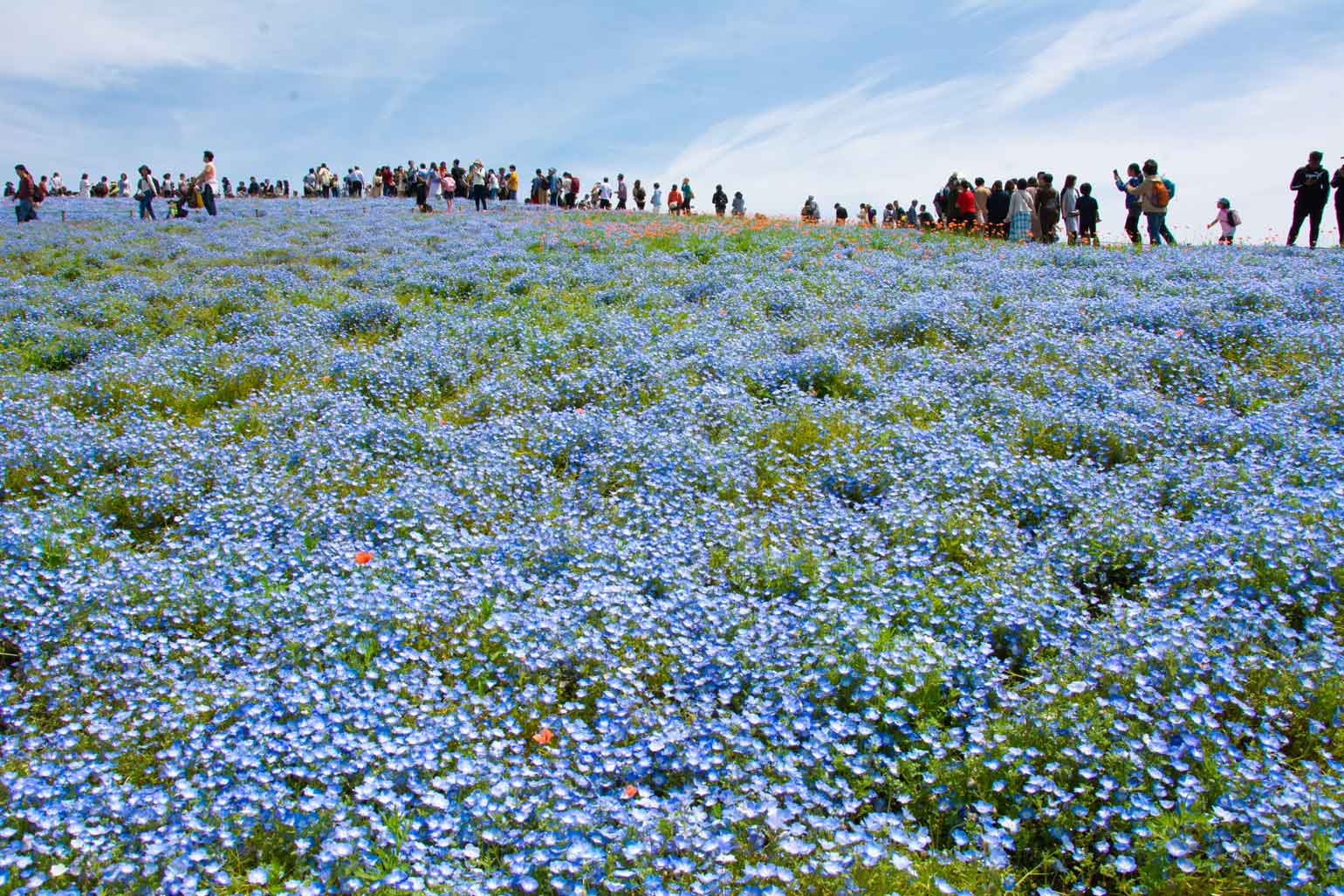 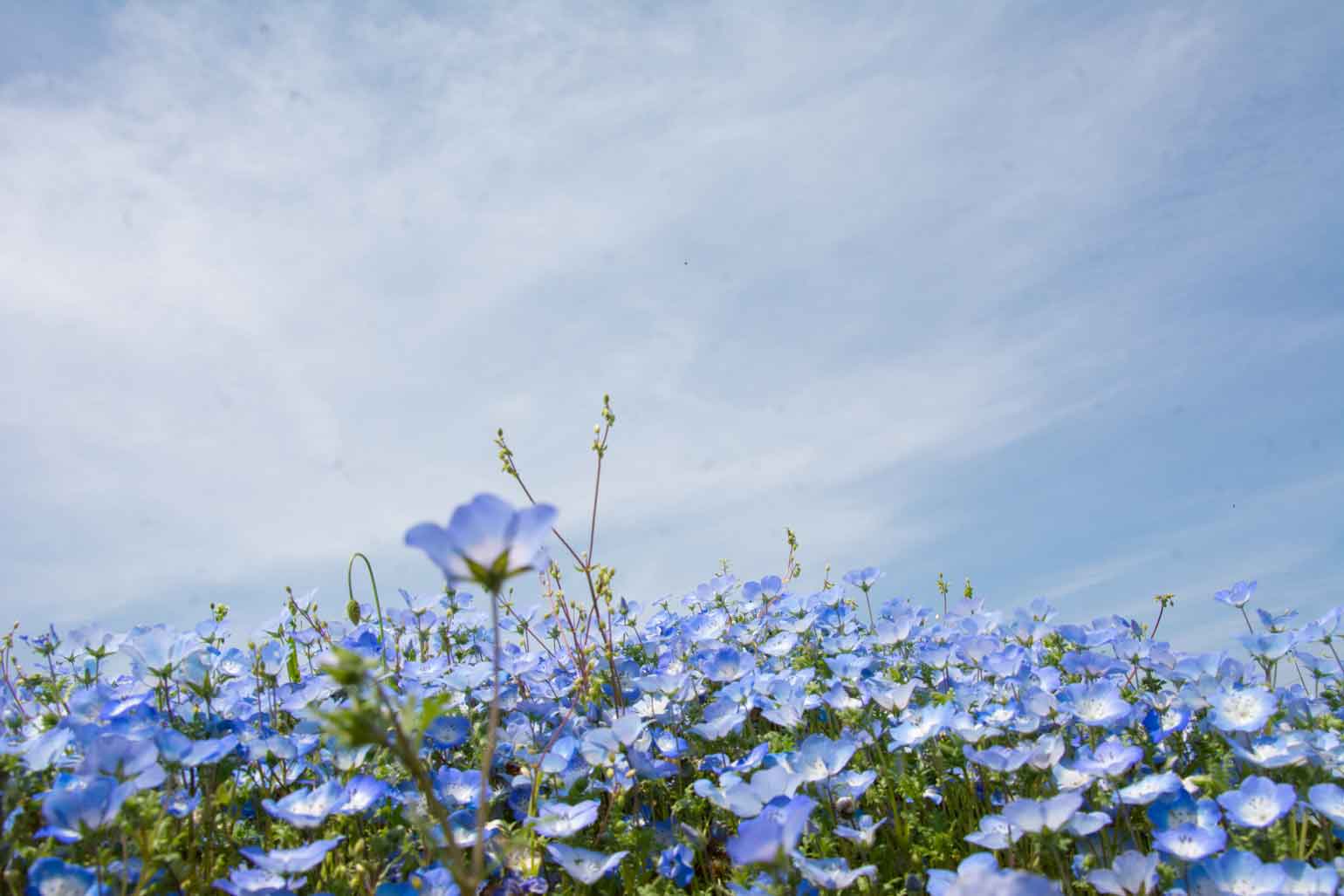 Near the park’s main entrance is a large forested area featuring tulips which usually bloom around late-April. There are walking trails through the extensive Hitachinaka Nature Forest, while the Dune Garden showcases plants native to the coastline of Japan.

The tulip is native to Turkey and were improved in Europe before coming to Japan in the 19th century. The tulip garden in this park features the colorful design consisting of different tulip species. Early-types and late-types are grown together on the same area so that you can enjoy the colorful garden for a longer period of time. Under the pine tree, tulips in different shape and colors can be enjoyed in the sunlight shone through the pine trees. 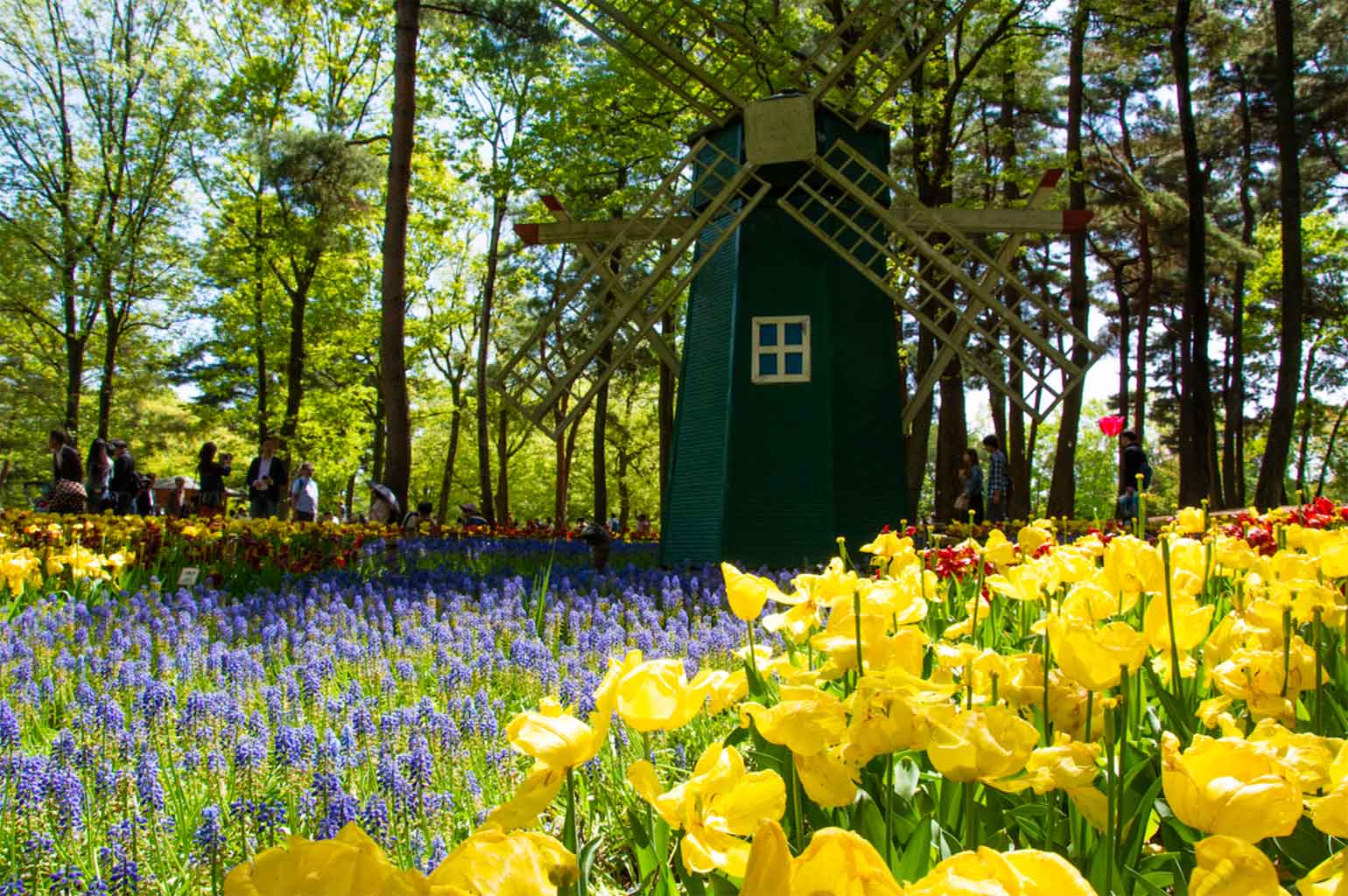 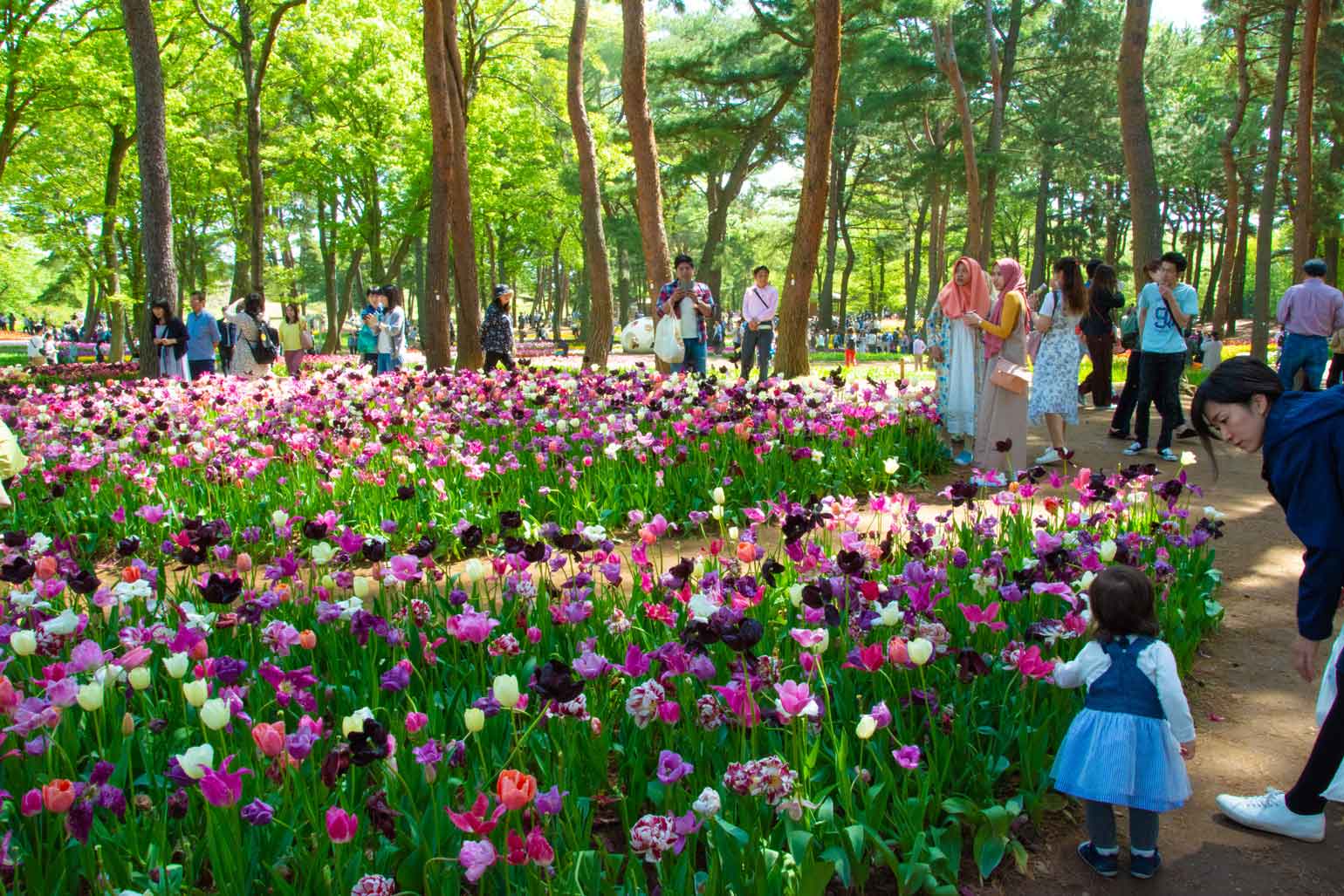 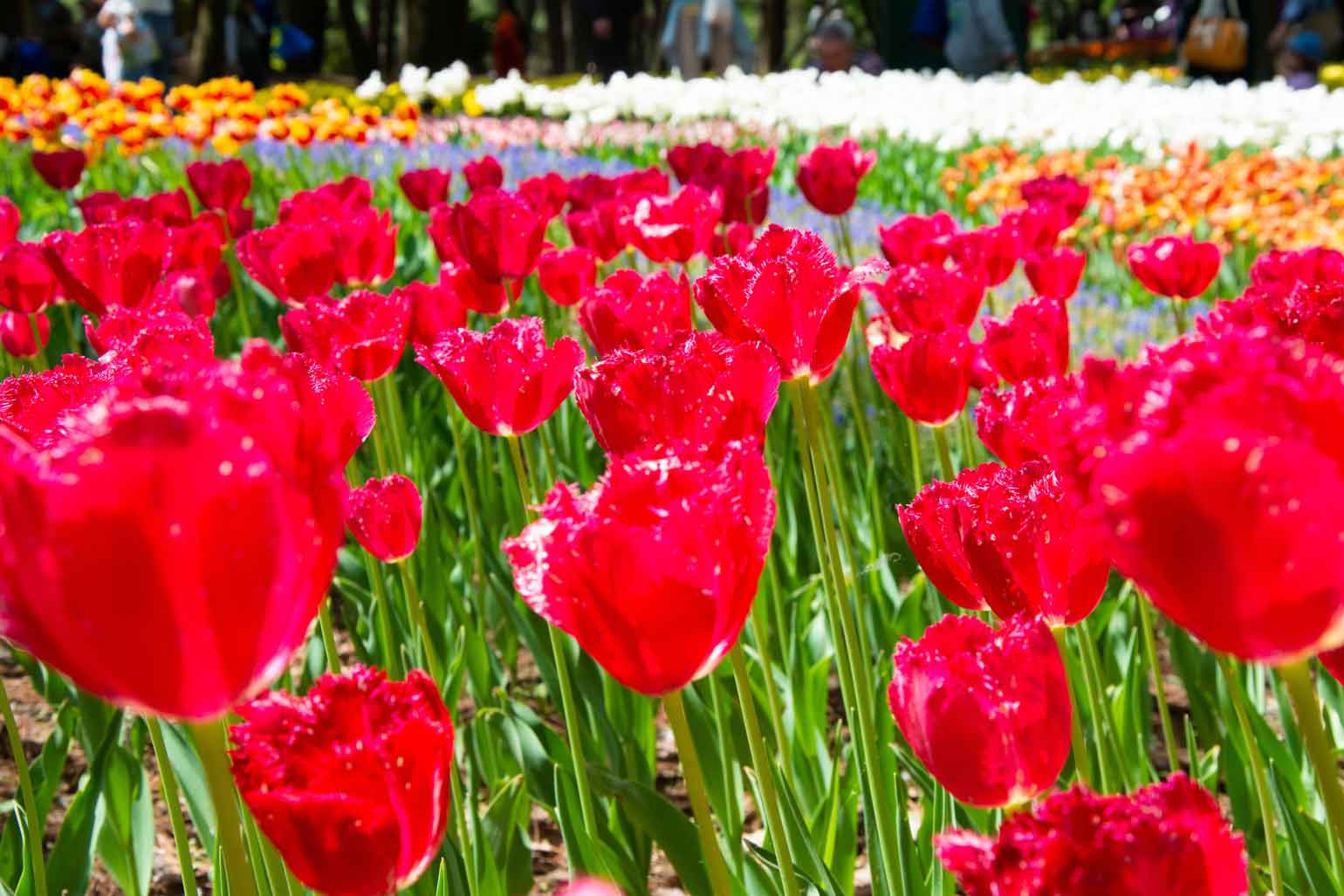 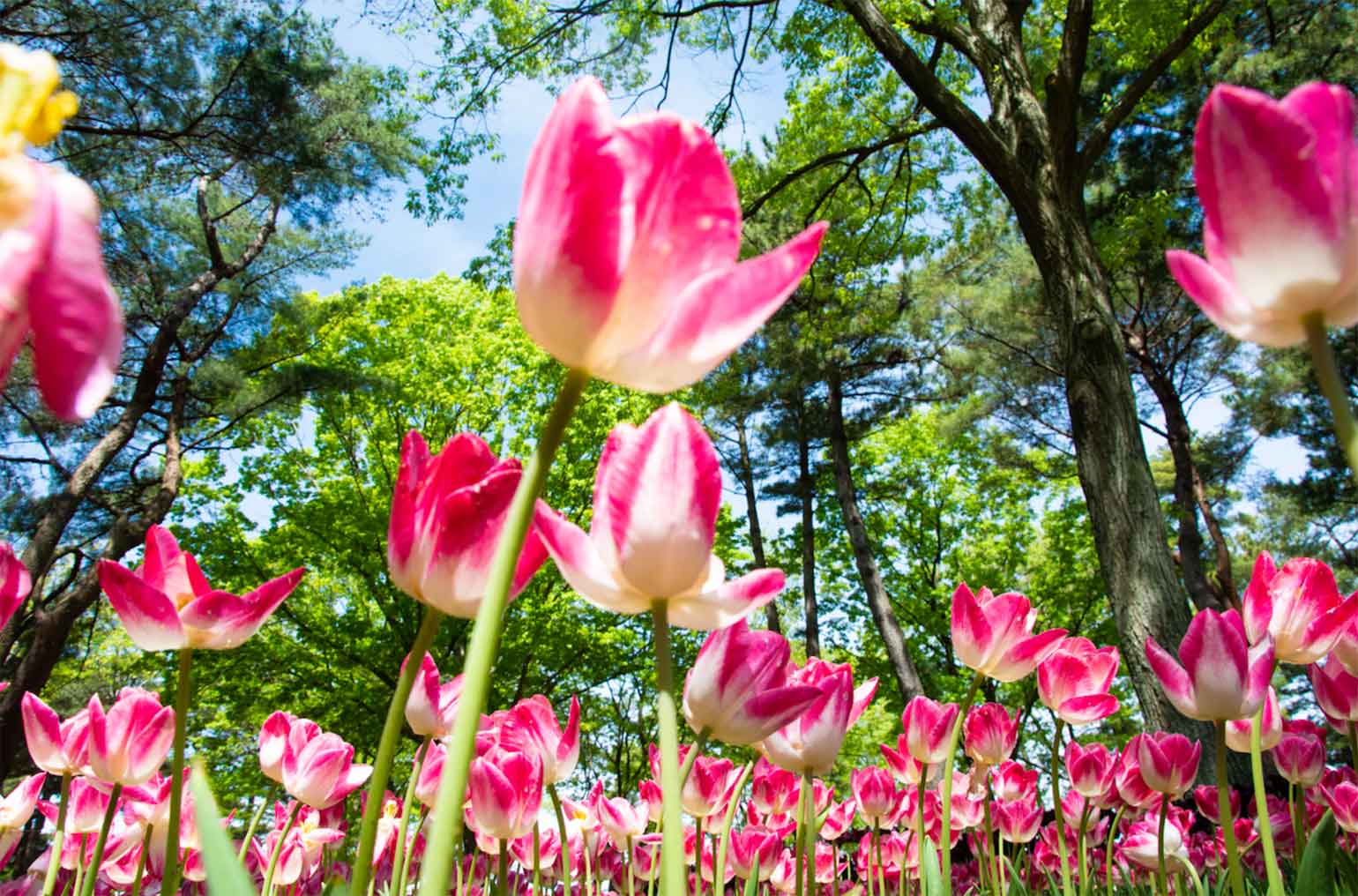 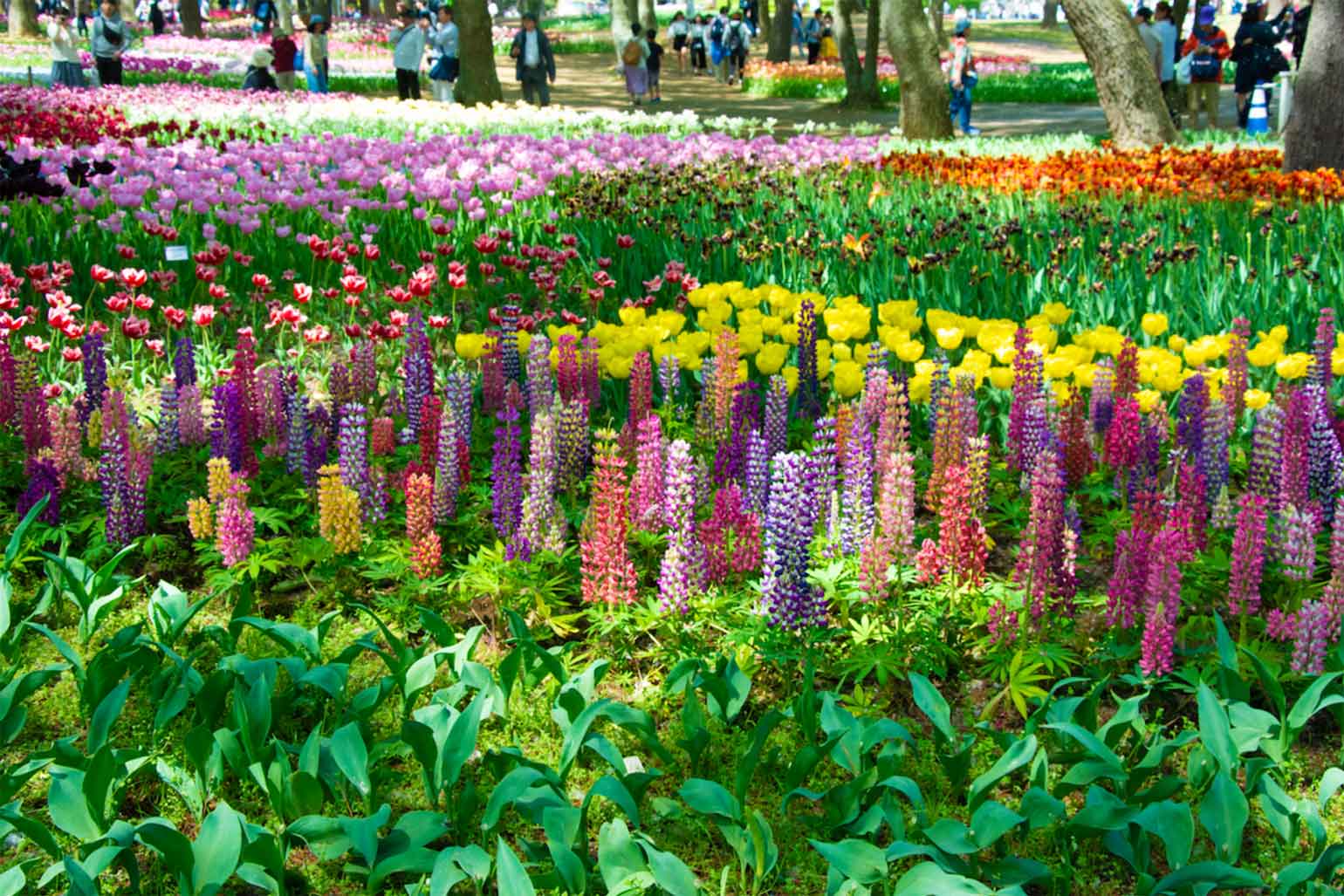 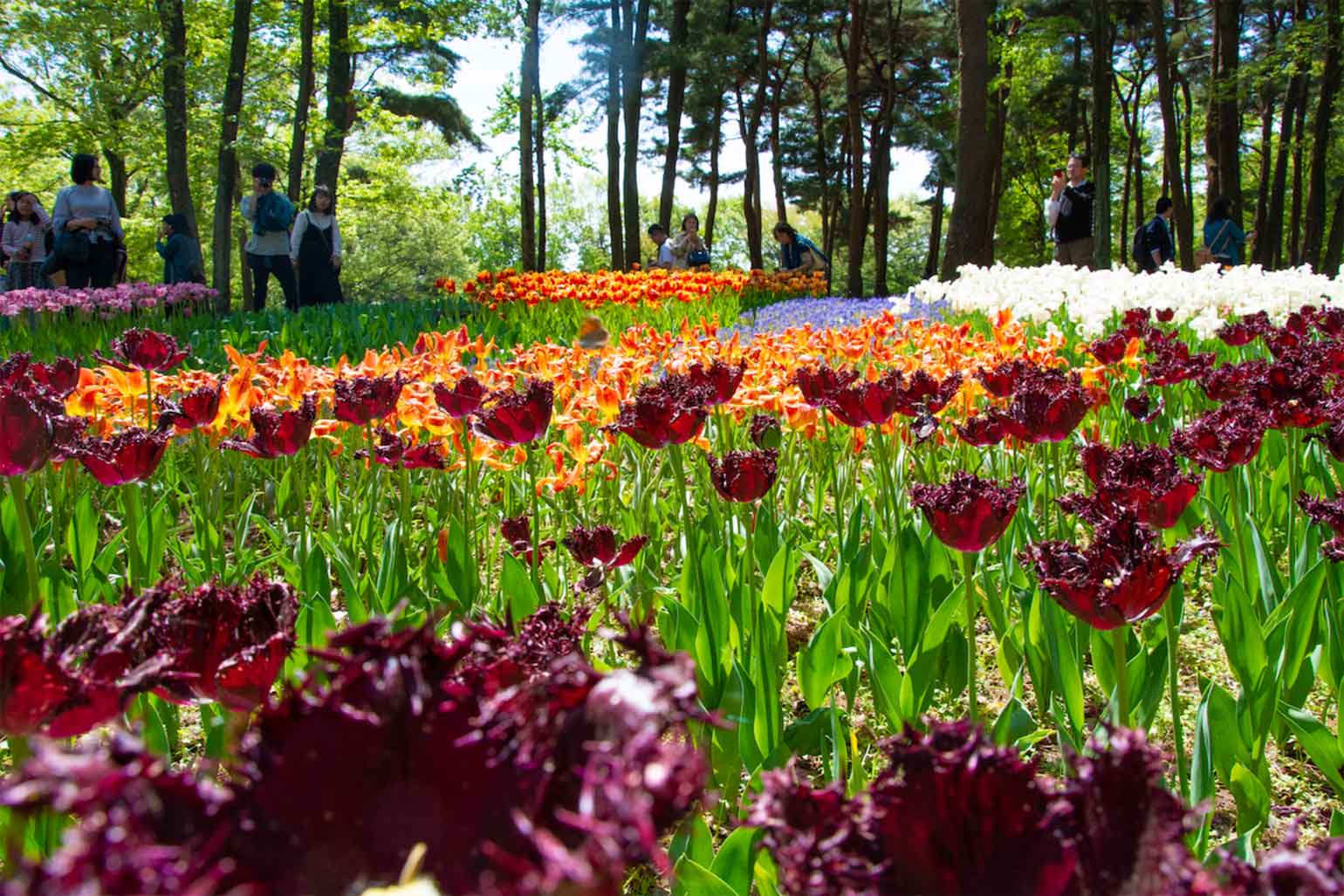 The park also contains an amusement park, cycling paths and BMX courses. It also hosts one of the four largest rock music festivals in Japan. Groups can reserve spots for barbeques. There are also a variety of restaurants and cafes that serve regional foods and seasonal sweets, decorated with the current flowers in bloom. 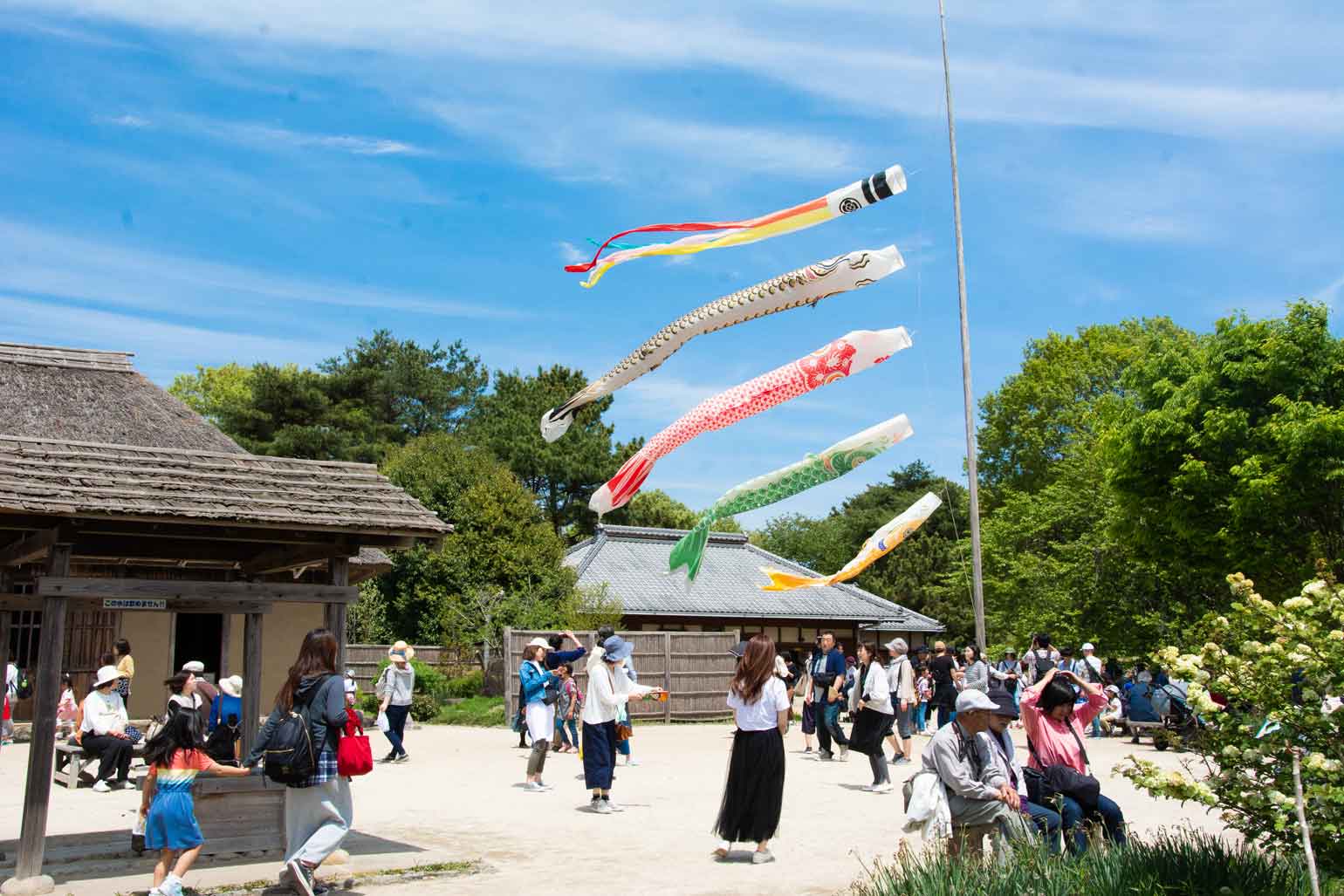 Hitachi Seaside Park is located in Hitachinaka, a city about 130 kilometers northwest of Tokyo. From central Tokyo (Shinagawa, Tokyo and Ueno Station), take the JR Joban Line to Katsuta Station (about 80 minutes, around 3800 yen one way by limited express train or two hours and 2270 yen one way by local trains, both covered by the Japan Rail Pass and Tokyo Wide Pass) and transfer to a bus to the park (15 minutes, 400 yen, not covered by JR passes, departures every 20-30 minutes).

bus Infrequent, direct highway buses connect Tokyo Station with Hitachi Seaside Park. The one way ride takes about 2.5 hours, costs 2240 yen and is not covered by the Japan Rail Pass.