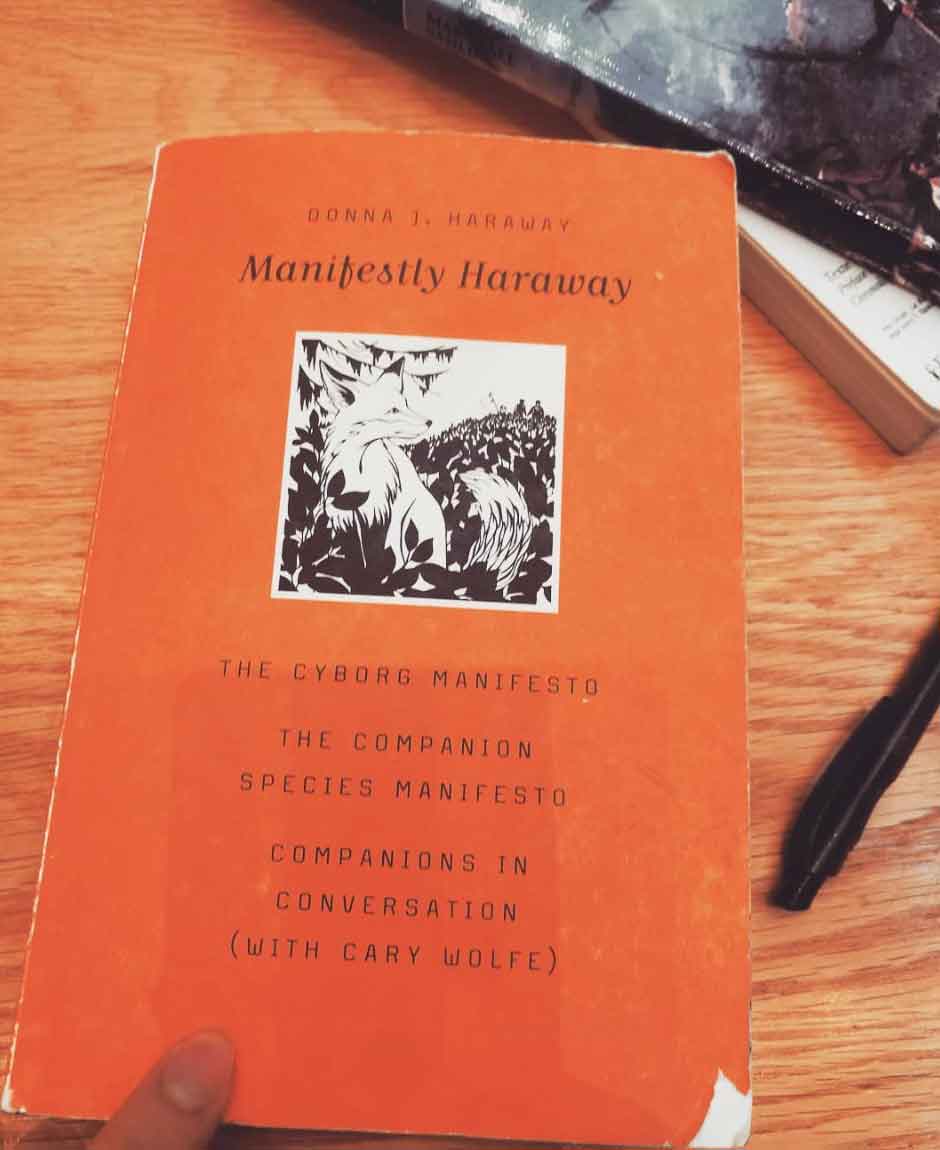 Haraway is in conversation with a lot of feminist theory and proposes the figure of the cyborg to consider a new politics. Writing in the 1980s, the cyborg was merely an incipient fantasy, but Haraway’s elaboration of this figure is precocious and simply put, genius.

The cyborg is a transgressive figure of the late 20th century that renders porous three previously strict boundaries: one, the boundary between human and animal (the de-exceptionalization of homo sapiens, more evident now); two, the boundary between organism and machine (think of prosthetic bodies, AI etc.); and finally, the boundary between the physical and non-physical (we can think of our devices, which communicate with invisible signals and waves).

The cyborg can be a troubling figure of patriarchal control and cybernetic domination, but it is, as she writes, “about lived social and bodily realities in which people are not afraid of their joint kinship with animals and machines, not afraid of permanently partial identities and contradictory standpoints” (p.15)—this is (if I comprehend correctly) similar to the political voice called “women of colour,” an “oppositional consciousness” composed of those who cannot be categorized into the essential “social categories of race, sex, or class” (p.17)

The cyborg is a figure of a new emerging world order that is transforming from “an organic, industrial society to a polymorphous, information system” (p. 28). Haraway notes the implications of the transformations from one system to the other, some of which include: organism -> biotic component small group -> subsystem reproduction -> replication nature/culture -> fields of difference labor -> robotics mind -> artificial intelligence We move from ‘natural’ and essential categories to fluid, cybernetic systems of communication; from heterogeneity into the homogeneous language of coding practices.

A note of the writing itself: Haraway’s writing is fertile, witty, provocative, improbable; I can only think of a handful of writers whose writing style has stimulated me as much as she has (Nietzsche, Sontag). Haraway employs Christian analogies to describe this transformation and to great effect: we have fallen from organic wholeness, idyllic nature (and essential categories) to fragments and partial connections; we are left only with a nostalgia for a common language (Babel).